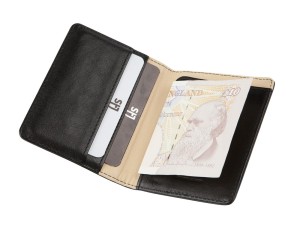 My banker’s wallet was this thin; he doesn’t carry rewards cards…or credit cards…

Before I left for the Camino, I went to my bank’s main branch to exchange some dollars for euros so I’d have local currency upon arrival. At this Wells Fargo location, employees act as ushers and, with a huge smile, escort you to the proper line as if you were a celebrity or a member of a wedding party. When I told my escort I was flying overseas, he suggested I open a travel account, with its own ATM card so that, if the card were lost or stolen, I’d only be at risk for the balance in that separate account.

Since I was already anxious about other aspects of my trip, this fear-based logic appealed to me. I’d have one fewer thing to worry about, right? He ushered me over to a young woman in a hijab who typed the paperwork as I tapped my toes and glanced at my watch. I had 20 minutes in the meter and, in Denver, the parking violations vultures circle relentlessly. As she handed me a thick folder with account documents and bank brochures, she explained that I’d receive this new card next week.

“We can FedEx it,” she said, and confirmed the address.

“Great.”  I stood up, took the relevant papers and placed the rest of the folder on her desk. “You can keep this.”

Upon returning, I no longer needed this card. Worse, after transferring the balance to my regular account about a month ago, it started accruing fees.  These I only noticed last week. This pesky account, and the card, were definitely candidates for elimination. Yesterday, I returned to the bank to close it out, and explained to the 30-something besuited bald banker that I was tired of keeping track of so many cards and, alas, some fees had been charged.

“I’ll take care of those for you,” he said and, with a few mouse clicks, returned money to my account.  “Are you sure you want to close it, though?”

I held up my reddish orange leather card holder, just over an inch thick.

“I really need to trim this,” I said.

“I hear you.”  He raised the barest silhouette of a wallet, about 1/4 the size of mine.

“I don’t carry any rewards cards anymore,” he said.

“What did you do with them?” I hoped that he’d say he threw them out.

“I keep them at home,” he said. With a few more mouse clicks, he closed the travel account, not even a signature required, let alone a stack of documents. “Do you want me to shred your card?”

For a second I considered turning it, and others, into a money-themed mosaic. Then I thought again; if such a project called me, I could solicit the materials.  Now, I wanted to get rid of stuff.

“Yes, shred it!” I practically begged.

Then he asked if I had ever considered getting the Wells Fargo credit card…no annual fee, blah blah…that offered overdraft protection.  Protection. That’s how they had sold me on the travel account.  Was I going to replace one card with another, defeating the purpose? But, since I am evaluating all of my financial tools, credit cards and rewards points included, rather than dismiss the offer out of hand I listened to his pitch.

Since it was vague, I put on my analyst cap, which had been gathering dust. In a previous incarnation, I worked at the Federal Reserve (examining banks, even) and believed that my analytical brain and I were one and the same, that my identity was bound up in critical thinking and using numbers to tell stories. As I slowly cut through the ticker tape that has entangled my soul, I’ve learned to expand my sense of self and not take my brain so seriously when, without my heart’s consent, it goes on an analytical binge or engages in Talmudic-style hair splitting. But, yesterday, I decided to gently grill the guy, because I owed it to myself to be informed.

“So, how many points would I need to earn a free flight?”  He couldn’t answer, so he looked it up.

“Would I have to book the travel through the bank’s website?” He thought so.

“What about cash back?”  Again, he consulted a chart, and the value of the points was not really high.

“What are the other rewards?”  He showed me a screen with various gift cards.  It seemed as if this bank’s offer had a little of everything which, for me, was not worthwhile.

“Most people don’t ask so many questions,” he said. “They just sign up for the card.”

“I want to know what I’d be getting,” I said. “Since I don’t want to be carrying that many.”

He picked up his mini wallet again and, with zero irony, said, “I don’t even have my credit card in here. It’s too tempting.”

Writer, Feldenkrais champion, Aikidoka and explorer of internal and external landscapes.
View all posts by ilona fried »
« What Does Your Wallet Say About You?
Resistance: the Good, the Bad, and the Ugly »