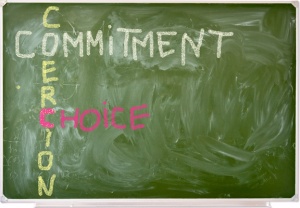 Life has, again, presented me with an opportunity to write about commitment.

Towards the end of June an acquaintance invited me to an event in Denver whose venue was capping the number of guests.  It was unclear what the cap was and at what point it would be reached.  If I wanted to attend, I would have to decide soon. But the event was nearly six weeks out, in theory enough time for me to fly to Spain and walk the Camino de Santiago again.  The date seemed not just beyond the immediate horizon, but on the far side of three mountain ranges, miles of red clay soil planted with vineyards, swaths of fields sticky with mud and pastures pungent with manure.  That I had recently relocated from Denver to Boulder magnified that sense of distance. What if, by the time the event rolled around, my life had adopted different rhythms, and getting to Denver (and back) would present complications? I simply wasn’t prepared to make a decision…yet.  And when I saw this person a week after receiving the invitation, I told her I’d get back to her.

Certainly, I did not want to say “yes” only to possibly renege, violating my understanding of “commitment”.  And I did not want to be coerced, even subtly, by scarcity thinking and claim one of the limited spots.  I could have just said “no”, but that didn’t feel true.  Many times in my life I had RSVPd to events or snapped up tickets or deals out of a fear of “losing out”; my fear of being excluded sometimes trumped whether I truly wanted what was on offer in the first place.  Afterward, I’d often be left with unease that, like a marionette, I had been yanked by another person’s sense of urgency rather than allowing my intuition or desire to drive the decision. There was also this nagging question twisting around my psyche like a stubborn vine: if someone requests my presence, does that mean I “should” go, regardless? “Should”, with its undertones of duty and propriety, feels like shackles around my heart.

When I was younger, I drank the cultural Kool-Aid and believed that the success of an event is commensurate with the number in attendance. Occasionally, when I was feeling ambivalent, I appeared at gatherings partly to increase the chances of folks showing up at mine, as if a small turnout would be a “failure”. But accepting invitations out of a wish for eventual reciprocity is also fear based, subtly coercive of oneself and the other.  Ideally we show up because we want to, not out of obligation or an implicit quid pro quo.  It’s the quality of the company that counts, not the quantity (especially for introverts such as myself).  In this instance, if I were to attend, I wanted to make that choice without pressure.  And, if in the time it took me to get to a wholehearted “yes” the event filled, I was willing to accept that.  I preferred to be “left out” of this event than to leave myself out of the process.  As an introvert, I can’t always predict when my energy will start to run low; rather than say “yes” and honor that commitment by showing up drained and miserable, I would rather wait to decide.  As I keep learning, there is nothing worse than abandoning oneself for the sake of externals (opinions, approval, etc.). If one is truly connected to oneself and to life, it’s nearly impossible to feel as if one is “missing out”. Only the ego and the mind generate such scenarios to keep us from experiencing the present moment.

The other day I received an extremely apologetic and somewhat lengthy e-mail from this person saying that the event, still weeks away, was already at capacity.  I appreciated being notified, and was touched by the concern.  But one line fascinated and frustrated me:

“…since you were not able to commit earlier, at this point, I’m afraid that your coming is no longer an option.”

It was fascinating that, in addition to sharing the news, this person chose to spell out their perspective.  And it was frustrating that their interpretation, stated as fact, did not line up with mine.  In response, I expressed delight that the gathering had filled. What could be better than having eager guests?  And in the spirit of transparency, I wrote that what this person perceived as my inability to commit had, actually, been my conscious choice to not make a decision…yet.  There is a difference between desiring to make a decision and being so conflicted that one is paralyzed, and deliberately choosing to wait. Since what I am committing to (authenticity and freedom) is largely invisible, doesn’t have a deadline and can’t be easily quantified, my current modus operandi might confuse, discombobulate or even anger people who are operating differently.  As for my attendance no longer being an option, that to me feels less like a door closing than one opening in front of me, into possibility.  I’m free to do something else (or nothing) that evening, whether I make that choice two weeks, two days or two minutes beforehand.

Writer, Feldenkrais champion, Aikidoka and explorer of internal and external landscapes.
View all posts by ilona fried »
« Of Optics and Illusions
What Does it Mean to “Arrive”? »

8 thoughts on “Commitment: Choice or Coercion?”