“Should” is a Dirty Word 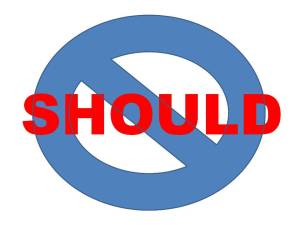 Not long ago someone “should” on me. Inside, I recoiled and shut down rather than reach toward them. Since then, I’ve been trying to think of a context in which that word has a kind, benign or even neutral connotation. I can’t come up with a single one. Even saying the word, a single syllable with a hard ending, creates a tightness in my throat and upper chest, as if to reinforce its judgment and sternness. Yet, in our culture, we use this word a great deal, often without thinking about how obscenely insane it is and how painfully it often lands. Here’s a common example:

However the speaker fills in that blank, essentially they are comparing actuality, in which whomever they are addressing did or did not do something, to a hypothetical scenario, some culturally constructed yardstick or parallel universe in which that person “knew better”. But had they known better, they would have behaved differently.

To tell someone they “should know better” essentially shames and blames that person for not inhabiting the reality that the speaker believes is meant to be, even though it does not exist in that moment. In the case of a parent who has told their child umpteen times to do a certain thing or take a certain precaution, they might be flummoxed if their well intentioned advice appears to fall on deaf ears. But rather than assume that the child “should know better”, why not inquire about the perplexing or surprising behavior? Maybe the child did hear the same things a hundred times but, in that moment of lapse or apparent ignorance, is preoccupied or distracted with something more pressing to him or her. How does shaming them help anyone, other than providing the speaker a sense of smugness?

When we grow up hearing how we “should have known better”, we internalize the same illogical reasoning as adults. Let’s say it takes us time to learn something new, such as a different routine or skill. When we eventually master what was once novel, going at our own pace, that shaming voice might come in to tell us that we “should have” figured it out sooner.

How crazy is that?

Telling ourselves we “should have” done things differently dishonors who we actually were when we weren’t living up to our imagined potential or keeping up with the Joneses. It’s sort of like telling a bud that it “should have known better” and bloomed directly from seed to flower, rather than taking however much time it needed to grow, perhaps periodically wilting and reviving along the way, depending on the environment.

Then there’s the somewhat less toxic but still not completely neutral use of “should”, as in, “You really should _______”. Whether it’s telling someone to read a certain book, see a particular film, dine at a certain restaurant, or something more weighty, like breaking up with a lover, “should” in contemporary usage is tinged by the sense of obligation and propriety. It creates a slight dominance of the person saying it over the person hearing it that might impede a more authentic connection.

In the case of making a movie, book or restaurant recommendation, why not say something like, “I think you’d really enjoy ____ based on what I know about you”, or “I loved XYZ and I think that you might, too.” When such a suggestion is offered without “shoulds” attached, then the person can more freely choose whether to follow it. And while it’s difficult to watch a friend or loved one suffer or struggle in a romantic relationship, rather than telling them they “should” break up or get help, why not share how much you care about them and that you wish them happiness? But that means risking authenticity, rather than sounding authoritative, which is why people frequently shy away from more intimate statements.

And to replace the shame inducing, “You should have known better,” wouldn’t it be a relief to everyone to instead ask in a loving tone, “Darling, are you aware of what just happened?” Maybe the person (child or adult) is unaware and, if told gently, will appreciate having their awareness expanded. Or maybe they are aware of a bigger picture that informed their behavior, so what felt internally correct to them appears counterproductive to others with a different perspective.

The bottom line is, if something is happening that doesn’t conform to one’s version of reality, rather than argue with it, get curious. As Benjamin Zander and Rosamund Stone Zander write in The Art of Possibility, when life isn’t going the way we want, or someone’s behavior is pushing our buttons, the quickest way to shift our relationship to the world in that moment is to exclaim, “Fascinating!”  Unlike “should”, saying this multisyllabic F-word requires the teeth to part, allowing a breath of fresh air to enter. That alone could turn a situation around.

7 thoughts on ““Should” is a Dirty Word”