New on the Blog: A Guest Poem from Across the Globe

Almost a year ago I wrote that blogging is like placing a message in a bottle and throwing it out to sea. I expressed a longing that “someone I don’t know will open these bottles, read the messages, and send one back to me. Ideally that message will light me up, connecting with me a kindred spirit whose inner life is similar to mine, even if their circumstances differ significantly.”

My recent article, “Why I’d Choose a Burkini Over a Bikini“, was picked up by Huffington Post India and opened by many, including a reader in Thiruvananthapuram, capital of the state of Kerala. This person sent me a short note saying they had a poem about the French burkini ban. Of course I wanted to read this message in a bottle! I told them to e-mail it to me. They sent me the poem, whose first stanza (above) stopped me in my tracks. After reading the whole thing, and without knowing anything about the writer, even their gender, I knew I wanted to share it. The poet agreed.

My regular readers might wonder why a poem from an Indian writer is appearing here. Since my blog is about “bringing awareness to the menu of life”, and life is serving up a heaping and unappetizing international buffet of intolerance, fear and hatred, I hope this poem will act as a much needed and substantial palate cleanser, something to refresh the mind and even reset the heart. The poem is provocative, perhaps requiring a few reads to fully digest. I returned to it multiple times before exchanging additional e-mails with the poet. It turns out that this poet is a recognized, emerging voice for the “have nots”, including the voiceless in India’s caste system. Thank you, Chandramohan S, for enriching my world and reminding me of the power of poetry. May your words, which I am honored to share, spread far and wide and touch multitudes. The poet’s bio is at the end.

THIRTEEN WAYS OF LOOKING AT A BLACK BURKINI

“I created the burkini to give women freedom, not to take it away “-Aheda Zanetti

1
Burkini
Is a language
Terrifying those ignorant of its text.

3
All you need is in that bag:
Change into a garment
More palatable for the cops in uniform.

4
Some garments cling too close to your surname
Like a metaphor
Too loud for good poetry.

5
Sea surfing can be tiring
Like an infinite ebb and flow of a questionnaire.
Batting an eye lid can be a tad too immodest.

6
Tether yourself close to the beach.
Do not surf too deep into the ocean.
Never self-intersect in circles of knots and tangles.

7
Bruises sustained from frisking
Metamorphose into festering wounds.
Gangrene could gnaw at your surname.

8
Erase your footprints from the sands.
Waves of time rarely wash the footprints of a scuffle.
Prolonged scuffle can bury us all in a deep hole.

9
Do you remember the first corpse
The sea sucked off a turbulent beach?
The sea spat it out after three days of frisking.

10
The footprints of scuffle
Implicates you from shore to shore,
Blowing up all bridges between you to anyone.

11
During this conversation
Some territory has been ceded across
The tan lines of your body.

12
Your body stripped of the garment
Remains an evacuated language.
Can a language be a scarecrow?

13
History will catch up with you
In your rear-view mirror
Even if you are full throttle in your
Pursuit of happiness. 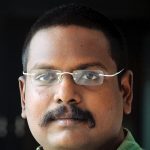 Chandramohan S is an Indian English Dalit poet and literary critic based in Trivandrum, Kerala. He is part of the P.K. Rosi Foundation, a cultural collective (named after the legendary, pioneering Dalit actress) that seeks to demarginalize Dalit-Bahujans. His first collection of poems titled “Warscape Verses“ was published in May 2014. His second collection of poems is titled “Letters to Namdeo Dhasal” and is forthcoming. A few of his poems have been used at many protest sites. He has been anthologized in LAND: An Anthology of Indo-Australian Poetry (edited by Rob Harle) and 40 poets under 40 (edited by Nabina Das and Semeen Ali). He was instrumental in organizing literary meets of English poets of Kerala for the Ayyappa Panicker Foundation and for Kritya Poetry festival.

Writer, Feldenkrais champion, Aikidoka and explorer of internal and external landscapes.
View all posts by ilona fried »
« Have I Been Hiding? No, Just Writing Elsewhere
Feldenkrais Off the Mat: Awareness Through Mushrooms »

3 thoughts on “New on the Blog: A Guest Poem from Across the Globe”