Lessons from a Goat 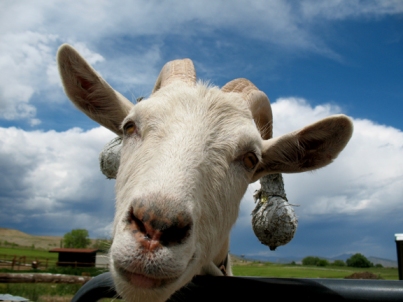 What if we all covered our sharp points with tennis balls?

I met this goat yesterday at a farm where I attended a workshop on compassion (facilitated by humans but taught by horses).  While the workshop was fascinating, I learned just as much from this creature, with whom I spent a good chunk of the lunch break.

Unlike the horses and their subtler forms of expression (such as the twitch of an ear, the relaxation of the lower lip), the goat’s signals were loud and clear.  His bell jangled as he trotted over and gazed at me with bright gold eyes, both playful and profound.  He climbed up on the fence, rattled it a bit, and tried to stick his nose near mine and in my yogurt container, which I had placed nearby.  I whisked the yogurt out of range and scratched his face, which he seemed to like.  Since his horns were protected by tennis balls and duct tape, I had nothing to fear.  I wondered what it would be like if the rest of us walked around with our sharp edges and difficult personality traits clearly marked, so that we wouldn’t accidentally poke one another.

This afternoon I debated whether to attend the annual fundraiser for Nevei Kodesh, a Jewish Renewal congregation in Boulder.  I’m not a member but I’ve attended services and events there and once donated art to this benefit.   The program included a panel discussion on “Post Traumatic God Disorder” and a teaching about “Listening to Kabbalah and Nature in Times of Change.”   I was interested in both topics, and the in-house comedy sketch that followed, but I had a headache and felt lethargic, additional stressors for this introvert.  Unlike the goat, I was not in the mood to socialize; I also didn’t have tennis balls or a convenient way to signal to people that maybe they shouldn’t get too close.  I decided to go, anyway, and just be with whatever arose.

The gathering was in a borrowed space, at a church in an unassuming building at the base of the foothills.   I arrived with enough time to enjoy some of the food and say quick hellos to a few people before the program started.  During the break, I wandered onto the back patio and noticed a labyrinth made of gravel with rock borders.  Weeds had forced themselves between the larger stones,  muddying the delineation of the path.  Curious, I stepped into it and followed its twists and turns as it  looped around and across itself in surprising ways.  I moved methodically, not at the ultra-slow pace of walking meditation but also not rushing.  After maybe eight or ten minutes, I arrived at the labyrinth’s center and felt a bit better.  Had there been enough time for me to retrace my steps to the beginning, revisiting the curves in reverse, perhaps I would have arrived closer to my own center.  But the half labyrinth was restorative enough that, when I returned to the patio, I enjoyed a conversation with a woman who had been watching me pace.

Back inside, I noticed another woman with a hand printed sign dangling from her neck.  It said that she’s had laryngitis for three months and if one wanted to know more they could pull on one of two purple tabs affixed to the sign.  One said “the short version”, the other said, “the long version.”   I told her that I loved what she had done, and that maybe next time I attend a gathering when not feeling overly social I could wear a sign that says, “Normally friendly but having a bad day,” or, “I’ve exceeded my daily conversation quota,” my tennis ball equivalent.  She whispered that I could just claim to have laryngitis…but if I did that, I wouldn’t be as straightforward as the goat.