Taking Stock at the Stock Show 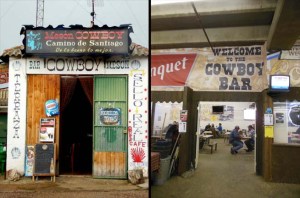 Since I went to “Meson Cowboy” in Spain, would I hang out at the “Cowboy Bar” in Denver?

For a few weeks every January, the Denver Coliseum hosts the National Western Stock Show, a celebration of livestock and the men, women and children who tend them.  When I first moved here, the event sparked both curiosity and aversion.  Having never been to a stock show, I wondered what it was all about.  At the same time, ghosts of my past lives wondered why I would pay the equivalent of a sushi dinner to see cows, horses, sheep and pigs.  And I was also somewhat in denial about the nature of Colorado.  I only wanted to see the glistening mountains and deep canyons, Denver’s museums and theaters, and the newer restaurants and preferred to ignore that which I didn’t understand or made me uncomfortable.  While Denver is no longer as much of a “cow town” as it once was, its roots are in the Wild West.  Cowboys (and gals), pick up trucks and gun shops are as much a part of the landscape as bicycles, skis and snowboards.

That first year, caught in an internal debate and unsure which stock show event to see, I didn’t go.  And in subsequent years, I failed to attend, out of a combination of inertia, lingering East Coast elitism and prioritizing other activities.  This time, I felt compelled to visit, both to pay homage to the ranchers and farmers and to take a personal inventory.  While on the Camino, walking for hours with just the sound of my footsteps, breath and heartbeat as a soundtrack, the sudden tinkling of bells was a welcome distraction, and the sight of horses, ponies, cows or sheep after turning a corner or cresting a hill was a thrill.  So was sharing the path with clusters of cattle, hoofing it back to the barn after a day in pasture.  I noticed that my delight in farm creatures was fairly consistent throughout; even after walking 450 miles, I still stopped to look at, photograph or say hola to them. Would I respond similarly at the stock show?  Or would I have fallen prey to “what happens in Vegas stays in Vegas”, the idea that certain aspects of ourselves (or misbehavior!) emerge only when we’re elsewhere, be it Vegas, Venice or, Villalcazar de Sirga (a Spanish hamlet)?

Before I began a meditation practice, it was a paradox why my experience of  myself in a “foreign” land felt more free and familiar, or real, than in the country of my birth.  Having flown overseas dozens of times, for either shorter or longer stays in other countries, I have accumulated enough evidence of this phenomenon to know that it’s true for me.  I often wondered if it’s possible to integrate more of my adventurous, traveling self into normal life so that, wherever I am, I’ll feel more like a singular “me,” rather than an albergue housing a collection of people, each with a distinct set of interests and desires forced to co-habitate.

It’s taken years of sitting on a wood bench, attending retreats and digesting dozens of books to understand, in more than just an intellectual way, how who we are is a function of the stories we tell ourselves and others.  Some of these narratives operate so subconsciously that we don’t even realize we are obeying them.  Some of these stories were told to us by our parents, families, communities, educational and religious institutions and we took them to be true and, whether we were aware or not, made them our own.  But some of us discover that the identity we’ve been living in, even if we consciously had a hand in creating or choosing it, can become a box, limiting our expression or range of motion. For example:  If I insist that I’m a mountain person, I might dismiss kayaking out of hand; if I tell myself that I’m an outdoors person, I might equally consider canoeing and hiking, kayaking and rock climbing.  If I consider myself to be a cultured city dweller, I might be more likely to spend $25 on a theater, not rodeo, ticket.  If I proclaim myself a lover of all things in Colorado, then I’ll embrace coffin racing at “Frozen Dead Guy Days” with as much enthusiasm as exhibits at the Denver Art Museum.  Sometimes declaring it makes it so, and our words and corresponding actions construct a new or more expansive identity. Other times, we learn that we can’t become something we’re not; we acknowledge the parameters of our personality or physiology. 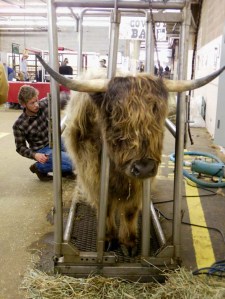 When I bought my ticket to the stock show grounds a few days ago, my inner foodie grumbled at the cost and warned me to eat beforehand; it was unlikely that healthy, let alone vegetarian, food would be available.  And another voice whined that, really, I would get more out of a visit to the theater.  As I wandered through the vendor hall at the coliseum, I could not feign an interest in the rhinestone studded belts, jeans and handbags or the cowboy hats in every color.  I felt like an interloper as I dashed through the fast food gauntlet — heavy on giant turkey legs, BBQ and other cooked meat — as quickly as possible.  Eventually, I made my way to the back of the complex, where livestock stood or slept in pens.

Several sheep, already shorn, wore cloth coats of many colors and patterns as they huddled together.  Others awaited their turn under the razor.  Swine – pink and grey – slumbered on straw beds, their legs kicking as if they were dreaming of romping in a field.  Highland cattle, eyes obscured by long bangs and adorned with spear-like horns, stood in metal chutes while their handlers trimmed, blow dried and brushed their long hair, before applying mousse and hair spray.  Most of their hooves gleamed, as if they had been polished.  Some of the beasts, unhappy to be shackled at the salon, bellowed.  I snapped dozens of photos as I wandered down each aisle, admiring these majestic creatures, the amount and kind of care they required and the dedication of the families that raise them.  Threading my way through the stalls, I saw a sign for The Cowboy Bar, a watering hole for those wearing 10-gallon hats and pointy-toed boots.  I remembered my visit to Meson Cowboy, in a crumbling Spanish village, and considered going in.  But since I don’t drink alcohol and didn’t want the greasy food, I tipped my invisible hat by taking a photograph.

For those three hours, at least, I was back on the Camino, appreciating the unusual sights, sounds and distinctive culture.  And even though I didn’t have a destination, I was a few steps closer to freedom and integration.  My only regret was that I hadn’t spent more time there.

4 thoughts on “Taking Stock at the Stock Show”