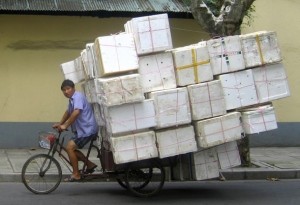 My brain feels like this when there are too many things around.

Each night along the Camino de Santiago, I sorted and organized the contents of my backpack, leaving behind what I no longer needed. Sometimes all I threw away were cheese rinds and Band-Aid wrappers, essentially weightless, taking up little space. Other times I left behind perfectly good things that were redundant, such as a compact hairbrush and mirror (I had a comb, most albergues had mirrors). To shed even a few ounces was a liberation from my habit of over-preparedness and of finding security through things.

As I wrote here at the end of 2012, when I returned from my six week pilgrimage, reacquainting myself with the contents of the duffel bag I had left at my younger brother’s home jarred me. My purse, cosmetics and even clothing seemed to belong to someone with completely different needs. But that was nothing compared to the mountain of things I had stored in a 10’x10′ unit before I departed Denver for Spain, what remained after driving carloads to Goodwill and selling items through eBay and Craigslist. During the first few weeks of walking, I didn’t think about this stuff at all. Perhaps a month into the Camino a fearful thought dared to skitter across my mind, freaking me out that something might have happened to my life’s possessions. Since there was nothing I could do, I dropped the thought rather than spiral into needless worry. Upon returning, I discovered I was not in a rush to reunite with my belongings, untouched and unscathed. Indeed, I could barely recall what they were.

Lifting the squeaky metal door to my storage unit the first time, I felt in my bones the weight of all the boxes and bins, stacked floor to ceiling. My spirit sagged. I wondered why I hadn’t given everything, or at least much more, away before my pilgrimage, allowing me to start fresh. Nimble. Not schlepping a caravan of stuff like a modern nomad. At the time I left for Spain, a wholesale purge felt too drastic and emotionally wrenching. Many things had stories or memories attached to them. To give those up at once terrified me. It would have been a kind of death, an erasure of the past.

But to be reunited with my belongings all at once also terrified me, as if their presence alone could crowd out my hard won inner space. It’s one reason I chose, upon moving to Boulder, to live in furnished rented rooms with neutral decor. With most of my books, artwork and knickknacks packed away, they could not bombard me with stories and memories that make keeping my attention on the present all the more challenging. In recent months I’ve made pilgrimages to my storage unit, an archive of past lives, to continue sorting, donating and gifting that which I no longer want or need. As the piles slowly shrink, I feel lighter and more emboldened to shed or shred perfectly good things that, just a few years ago, I would have kept simply because they were “perfectly good” or because, some day, I might need them. Having just moved to a larger, unfurnished space, I no longer wish to continue subsidizing my life’s gradually dwindling archive. I want to completely empty my storage unit and, yet, I fear that introducing too much stuff too quickly into my new space will rekindle post traumatic stuff disorder.

My father’s unexpected death likely triggered my disorder, and I don’t use that term lightly.  He left behind a large, cluttered house, where photographs and personal treasures mingled in drawers, closets and boxes with junk and useless papers. For months I waded through his things, separating wheat from chaff, fearful that if I weren’t careful I might throw away something precious. What if one of his endless scribblings on envelopes and lined notepads revealed something I hadn’t known? When overwhelm finally hit, I stored much of what I had deemed “wheat” in boxes and bins. In subsequent years, when time and energy permitted, I re-sifted the contents, discovering that many things I had clung to after his passing no longer seemed as critical. To find and discard new chaff was like removing another brick of grief even if it meant, at the same time, weakening the hold of memory.

People who lose their possessions to burglary, fire or flood deal with the shock of instant loss and the realization that they are not in control. Hopefully they adjust, adapt and move on from what was likely an impersonal event. In the rebuilding and redecorating, they can make new choices, unfettered by previous ones. They might discover, in the gratitude for remaining unharmed, how little they really need or how few things they actually miss. At times I wondered what I would do if my storage unit went up in flames. Would I cry? Would grief or relief dominate?

Years ago I read Milan Kundera’s The Unbearable Lightness of Being. The title alone still makes me pause, even for reasons unrelated to the plot. To feel that lightness and the fragility of each moment and of life itself can be so unbearable that we trade it for heaviness, either the emotional kind or the solid anchors of a house and furniture so that we feel tied to this world. Sometimes emotional weightiness is bound up in objects, whether they are as cumbersome as a couch or as light as a letter. For the last week or so I’ve sifted through boxes and bins of my own possessions. Often I can’t remember what’s inside, so opening them is like receiving gifts from my earlier self. Some things, like a trio of small ceramic pomegranates I bought in Israel, still delight. Others, like bent or slightly rusty kitchen utensils, do not. When I encounter duplicate objects or books, I no longer hesitate to get rid of one of them. If I haven’t used something in years, I no longer listen to the voice that says, “Well, one day you might want it.” Out it goes. Still, each item I donate, gift or throw away feels like prying a plank from the narrow bridge on which I’ve been walking and tossing it into oblivion.  I can no longer retrace all of my steps, only go forward. My hope is that by getting rid of more things I’ll be able to live in a way I haven’t before: in the present, with as much space and lightness as possible, much as I felt at the end of my pilgrimage.

Writer, Feldenkrais champion, Aikidoka and explorer of internal and external landscapes.
View all posts by ilona fried »
« Leave No Trace: Cleaning as Spiritual Practice
Who Are We, Anyway? »