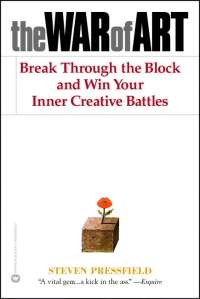 When I need a sane, no nonsense reminder of what resistance is, and inspiration for battling it daily, I pick up my worn copy of Steven Pressfield’s The War of Art.  It’s a must-read for anyone trying to live more powerfully, whether that means creating art, healing a relationship, or getting in shape.  As he writes, “Most of us have two lives. The life we live, and the unlived life within us.  Between the two stands Resistance.”

That he has capitalized the “r” is not a typo.  Resistance, in my experience, is an actual physical force, an energetic barrier I must either hurdle or push through whenever I go swimming, sit down to write or meditate, or pretty much do anything that promotes greater well-being or expands my soul.  Sometimes Resistance shows up as a barrage of thoughts.  It’s a treacherous shape-shifter.  Mr. Pressfield devotes the entire first section of his book to “Resistance: Defining the Enemy”, so I encourage you to check it out. When I hungrily reread The War of Art last weekend, I was struck most palpably by his description of “territory”, which he discusses in the book’s third and final section, called “Beyond Resistance: Higher Realm.”  (The middle section is “Combating Resistance: Turning Pro”).

Territory, for artists, creatives and visionaries, is usually not land or turf but an internal space.  But, like a farmer cultivating and irrigating the soil, we must tend to our territories so they’ll yield inspiration and renewal. In Mr. Pressfield’s words:

“1)  A territory provides sustenance.  Runners know what a territory is.  So do rock climbers and kayakers and yogis…The swimmer who towels off after finishing her laps feels a helluva lot better than the tired, cranky person who dove into the pool thirty minutes earlier.

2) A territory sustains us without any external input.  A territory is a closed feedback loop.  Our role is to put in effort and love; the territory absorbs this and gives it back to us in the form of well-being…

3) A territory can only be claimed alone.  You can team with a partner, you can work out with a friend, but you only need yourself to soak up your territory’s juice.

4) A territory can only be claimed by work.  When Arnold Schwarzenegger hits the gym, he’s on his own turf.  But what made it is his own are the hours and years of sweat he put in to claim it.  A territory doesn’t give, it gives back.

I needed the reminders that a true territory is a closed feedback loop, and that it returns exactly what we put in.  Trying to write (make art, get in shape)  for anticipated rewards (monetary or social) might, actually, deplete the territory, like spraying pesticides on the fertile soil of our creativity. We hope we’ll get higher yields but instead, over time, we deplete the nutrients.

But what also occurred to me, inspired by my adventures with tendonitis, are these addenda: 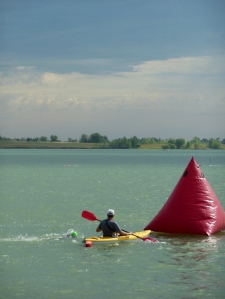 Some of us have multiple territories, liquid and solid.

6) A territory might be temporary (or, Don’t get too territorial about territory).

Until recently, I would have claimed absolutely that hiking was my territory.  And I had particular ideas about it, preferring to ascend trails of a particular distance and steepness. When I first learned how long it might take my tendonitis to resolve, I fell into a funk, unsure how I’d find renewal without hiking and snowshoeing.  My mind had prevented me from seeing that nature (not just the mountainous variety) is my territory until circumstances forced it to relax its grip, releasing me from the “hiker” identity which ego had turned into a trap.

7) A territory is about attitude.

As I discovered recently, it was possible to feel recharged and uplifted by the mountains, even in a car, sharing physical territory with tourists, when I changed my attitude.  And, to stay fit, I’ve revisited swimming.  Today, despite Resistance urging me to bail because it was cool and rainy, I participated in a one-mile open water event with a few hundred people. Had I approached this activity with a hierarchical mindset, measuring myself against others, I probably would not have signed up. By embracing swimming as a territory, I knew that if I was trying my best, even if I was the slowest, I could not lose.

What’s your territory?  Do you have more than one?

Writer, Feldenkrais champion, Aikidoka and explorer of internal and external landscapes.
View all posts by ilona fried »
« When a Memory’s Absence Tells a Story
Of Optics and Illusions »

5 thoughts on “What’s Your Territory?”