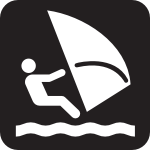 “Zensurf” through life by doing just one thing at a time.

We are going to do one thing at a time.

My tanned Colorado windsurfing instructor uttered those words on the shore of Big Soda Lake, but they could have also come out of the mouth of a Zen teacher, sitting on a black zafu at the front of a room.  He repeated that phrase frequently, like a mantra, just as Zen monk Cheri Huber reminds students that life unfolds moment by moment, breath by breath.  Trying to fast-forward through difficulty or unpleasantness, or taking shortcuts to “save” time, often compounds the original challenge.  In the case of windsurfing, those who are too eager to get on with it or lack the patience to master the “boring” basics might end up spending more time in the water than traveling on top of it, exhausting themselves in the process.

First, on a land simulator, we learned the proper stance.  We placed the inside of the foot  that was closest to the front of the board against the rig.  We planted the other foot about hips’ distance away, both feet perpendicular to the center line of the board.  Next, we bent down to grab the rope attached to the sail.

In windsurfing there are no jerking, grabbing movements.  We do everything slowly.

His words reminded me of the Zen focus on process over results, on moving mindfully in the world rather than making speed the measure.  He explained that to lift the sail we just needed to move one hand above the other along the rope until we got to the end.  No yanking or tugging required.  No need to hoist it quickly.  He told us to tuck our behinds, stand up straight, relax our shoulders, and extend our arms as we held the rope.

You don’t need to grip it.  Just let the sail hang off your arms.

I noticed I wanted to clutch the rope, as if that were going to keep me upright.  Eastern wisdom teaches us to not grasp, cling or control.  How often do we add stress and fatigue to our lives because we are trying too hard, our fists figuratively clenched around attachments to beliefs, stories or particular outcomes?

“Keep your chin up so you can see where you are going,” he said. The position felt familiar, like mountain pose in yoga, easy enough to do while standing on dry land.

Then he taught us, step by step, how to turn the surf board around.

“Using the rope, move the sail towards the back of the board,” he said.  Even though we were on land, the board started to turn. “Slowly, shift your feet around.  Remember, place the foot closest to the front of the board against the rig.  And if you lose your balance, don’t drop the sail.  Take it with you into the water so it doesn’t fall onto you later.”

We donned life jackets and carried the boards into the lake.  I clambered atop, astonished that, despite jelly legs, I hadn’t immediately toppled.  My chest bubbled with excitement and fear, delicious sensations of aliveness that frequently elude me.

“Raise the rig,” he called from the sandy beach.  Friends had warned me that the sail can be heavy when wet, but lifting it gradually, hand over hand, allowed the water to fall off.  It was easier than I had expected.

“Great.  Now, turn around,” he said.  My heart thumped.  I took one deep breath, then another and another to steady myself.  I slowly swung the sail to the back of the board and gingerly repositioned my bare feet on the slick surface.  I looked up, amazed to still be standing.

I had been so focused on staying upright that I hadn’t realized the gentle wind had moved me down the shore.  I executed a second, painstaking turn, and the breeze blew me back towards the instructor.

This time, I lost concentration, dropped the sail and tipped backward. The plunge into cool water refreshed me, and I relaxed since I no longer had to worry about when I would fall in.  The instructor told me to swim to shore and pull the board with me.  Back on land, we returned to the simulator and learned how to position the sail to catch the wind.

We are going to do one thing at a time, in a certain sequence.

“Grab the rig with your hand closest to the front,” he said.  “Pull it toward you so the mast touches your shin.  Not the knee, but the shin.  Then, take the other hand, grab the boom, and move the sail 45 degrees.  Don’t combine these movements,” he said.  I wondered how many thousands of previous students had, in trying to be fast, ignored his instruction.

We returned to the water.

“I’m going to let you sail for four seconds,” he said. “Then, you’ll come back.”

Atop the board, I turned it around again to face away from the shore.  And off I went, at the pace of the prevailing wind, barely 5mph.  That was fast enough to give me a feel for it without the challenge of being knocked around by a stronger breeze.  Still, it didn’t take long for me to arrive near the middle of the lake.  I maneuvered the sail and headed back to shore, in the process colliding gently with my classmate’s board (she was in the water).

I shook my head, my mind a complete blank.  We had learned how to turn, and how to move.  Stopping was easy: just drop the sail.  What else was there?

“I’m going to teach you how to steer, so you can go where you want.”

I was so thrilled to be moving around at all, it hadn’t occurred to me to choose a direction, despite the collision.  Again, he spelled out the steps, one at a time.  We returned to the water for a final run.  After a few minutes of practicing, I noticed thunderclouds approaching.  I returned towards shore, this time steering exactly to where the instructor was standing.  It felt comfortable, despite seeming impossible just hours before.  And it was accomplished by doing One. Thing. At. A. Time.  Maybe I’ll call that “zensurfing”.

Writer, Feldenkrais champion, Aikidoka and explorer of internal and external landscapes.
View all posts by ilona fried »
« When Curiosity Beckons
What is “Spiritual Practice”? »

6 thoughts on “Windsurfing as Zen Practice”