Lessons from a Purim Mask 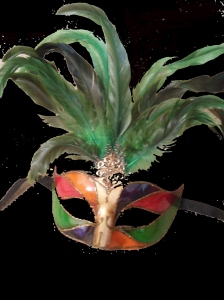 The mask I eventually chose had much to teach me.

“There is a face beneath this mask, but it isn’t me. I’m no more that face than I am the muscles beneath it, or the bones beneath that.”
― Steve Moore, V for Vendetta

Last night I celebrated Purim, the Jewish holiday commemorating the community’s survival in ancient Persia despite a plot to destroy it. Customarily, people don costumes that either recall the main characters in the Purim story or reveal parts of themselves that are concealed under the masks of day to day living. Celebrants are encouraged to enter an altered state – via alcohol or sheer rowdiness and joy – such that one can no longer tell the difference between good and evil.  Dissolving the duality in which we normally live, to turn everything upside down or inside out, or both, is a highly mystical act. Revelry, with the right intention, can be a form of spiritual practice.

An acquaintance invited me to a party at his house. Costumes encouraged, he wrote. I thought I’d rise to the occasion this year.  With just a few days’ notice, I didn’t have the luxury to concoct anything elaborate or even put much thought into it.  Instead, I drove to Theatrical Costumes, Etc. in South Boulder imagining I’d get a wig. The shop, located in one of the city’s many strip malls, lacked an inviting exterior.  Inside, however, I got lost in their extensive collection of paraphernalia. I flipped through the wig catalog, and asked the clerk if I could try on the Egyptian princess version. They were out of that particular one, so I substituted Cleopatra’s locks, but it looked rather silly and I didn’t enjoy how it felt.  Instead, I browsed their masks, hung floor to ceiling, ranging from just a few dollars to more than fifty. Several styles, shaped as suns or moons with shiny silver or gold facades, I recognized from Venice, Italy, where mask making (and wearing) is an art form. I tried on a few, both the moon, a cat shaped mask, and another with a huge beak that curved nearly a foot out. My reflections startled me. With such heavy camouflage, I could be anyone behind these facades.

As I removed masks from their display hooks, I thought the same design would be beneath, but instead 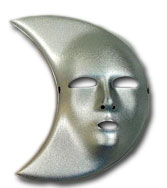 rested another that varied slightly in color or pattern, each offering its own nuance of intrigue and mystery. There were more unique masks than met the eye, more than I could possibly touch, try on and entertain in the time I had available. Some of them, covered in lace and satin or studded with silk roses, reminded me of lingerie, but for the face. One had delicate beads dangling from it, like a tiny veil from Arabian Nights. Eventually I found a colorful one topped by a plume of green feathers. It was more comfortable than the cat or the beak, less spooky than the moon, more affordable than some of the breathtaking Italian creations, and more festive than the boudoir-themed masks.

Dressing for the party, I considered the possibilities the mask offered.  I could be some kind of bird.  I decided that if anyone asked I’d say I was a parrot. Along with the mask, I wore bright red tights, the black sequined dress from my stint in The Vagina Monologues, and insanely red lipstick.  Driving there, I wondered how I might be like a parrot. I could be naughty and loudly repeat things I overheard that might embarrass others. I could peer at people with beady eyes and peck at them or their food. I could shake out my wings, squawk, and stomp around. For a moment these imaginings horrified me and then I started to laugh.  Maybe it would be tremendously freeing to be a rude, loud, colorful character, to mimic the precise behaviors that make me cringe or drive me crazy in others, evidence that I haven’t fully embraced these aspects of myself. Maybe I needed to liberate my inner bitch more often, be willing to ruffle feathers instead of smooth them, to help me realize myself more fully.

Had more than a minority of guests worn costumes and masks, I might have followed through with the parrot persona rather than just telling people about it. Still, it was worthwhile to try it on in my imagination, which is where any new action begins.  Wearing the mask, both a shield and granter of permission, helped me feel more relaxed. Chatting with another guest, I wondered aloud what would happen if I were to wear a mask around town. How much bolder would I be? Would I risk more vulnerability as well as unfiltered honesty? Maybe I will do that one day as an experiment. Meanwhile I marveled that this mask, purchased on a whim, had revealed so much. Sometimes the insights we seek are, literally, right in front of our face.

Writer, Feldenkrais champion, Aikidoka and explorer of internal and external landscapes.
View all posts by ilona fried »
« Amtrak Case Study: How You Do Anything is How You Do Everything
Commitment: to Process or Outcome? »

6 thoughts on “Lessons from a Purim Mask”