When a Trip Ends, I Feel Like Cinderella at Midnight

When the clock strikes midnight, Cinderella’s gown returns to rags, her coach becomes a pumpkin, the elegant footmen turn to mice. I feel that way almost every time I return to the United States after being overseas. The person I am, or become, when I am traveling is not the same as who I feel to be here, even though my clothing doesn’t change. While my time in Spain had often been stressful and lonely, and didn’t resemble a fairy tale or fantasy on most days, simply being in the swirl of another land and language, exploring new places and meeting other people on the move, seems to keep the doors of serendipity and possibility wider open than when I am in my own country.

Yesterday, during a long travel day, I tried to stay present to all the novelty and beauty to fortify myself for the “thunk” of landing. I left my AirBnB shortly after 6am to take the first of two trains to the Barcelona airport. With the cars already full with sleeping commuters, I stood near a door the entire ride, which gave me a view of the pink sun rise over the Mediterranean. I wondered, if I lived there and took that train daily, would I marvel at the sunrise or snooze through it, too? 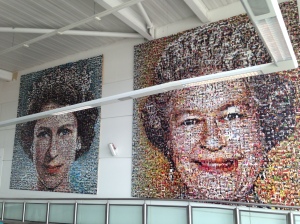 After exiting that first train to find the second one, a man asked me in non-native Spanish if it went to the airport. I pointed to the airplane logo above the platform and told him it did. Curious about his accent, I asked where he was from. The Netherlands, he said. We proceeded to chat in our respective semi-decent Spanish until the train arrived. That this man was committed to practicing Spanish until the end of his trip, even though he could have switched to English, delighted me as it gave me the same opportunity. When I landed in London to change planes, two large photo mosaics of the Queen stopped me in my tracks long enough to read about the art and take a few pictures. It was only when I interacted with a British gate agent and was met by a stiff upper lip rather than greetings of “Hola, guapa!” (Hi, gorgeous!), that I noticed how much I missed hearing Spanish and how much the language and the friendly expressions had buoyed my spirits. It’s as if the music had started to wind down at the ball and I could hear the clock ticking towards midnight.

Still, in trying to focus on the beautiful and the novel, I found a lunch spot for my long layover that served healthy, attractive Japanese food. I tried to stay curious and appreciative while boarding my next flight on Norwegian Airlines, even though, I had been assigned a middle seat. One of my AirBnB hosts had suggested Norwegian as an affordable option for my return flight since I had cancelled my original ticket. Flying a different carrier is a bit like playing with a new toy and discovering its bells and whistles. Despite being a no-frills airline, my seat was larger and more comfortable than on my Delta flight to Spain, the plane newer and cleaner. I didn’t feel squeezed in coach. To keep fees low, meals and bags are charged à la carte (although my ticket, purchased through a third party, included a good gluten-free meal, served in an IKEA like cardboard box, and an afternoon tea, presented in a brown paper bag). Another fun toy? The interactive 3D travel map. To my surprise, I chatted for hours with my seat mate to the right, a British oceanographer living in Maine. In addition to discussing our respective travels, the state of the world and sharing snacks, he good-naturedly listened to my “new toy” discoveries even though he’d flown the airline before. To enjoy a leisurely conversation felt like a luxury in this distracted, soundbite driven age. When we landed, a nearly full orange moon greeted us.

As I got off the plane shortly after 7pm, my personal clock hit midnight. It’s as if my insides had been pricked by a pin. When I scanned my passport at border control, and the machine snapped a photo of me, it caught my drooping sadness on camera. The immigration officer asked me why I had been away so long, as if there needs to be a reason. What I didn’t tell him is that I wish I could have stayed overseas even longer.

Writer, Feldenkrais champion, Aikidoka and explorer of internal and external landscapes.
View all posts by ilona fried »
« Reclaiming Dignity: Feldenkrais with Jorge Ferri
With Money on My Mind, It Slipped from My Sight »