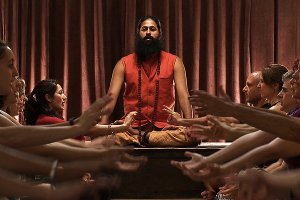 In The Art of Possibility, after decades of teaching music and seeing how students’ anxiety about grades interfered with their playing, co-author Benjamin Zander decides to give each pupil an “A” at the beginning of the semester.  Their only requirement is to write him a detailed letter explaining who they will have become by the end of the term, having already received the grade.  In other words, the “A” is not “an expectation to live up to, but a possibility to live into.”   Some of the students, accustomed to competing for grades or rankings are, at first, bewildered.  But soon they understand that they no longer have to see themselves as a “B” or “C” student, or ranked at the bottom, and that the grades and ranks are themselves inventions.  It’s really up to them to decide what kind of musicians and people they will become and, freed from the pressure of conventional grading, everyone behaves in class as an “A” student and blossoms.   In the book, the authors point out that we can give ourselves an “A”.  We can also give the “A” to others, an act of grace that allows us to hold people in the best possible light.  If everyone did that, jokes about mothers-in-law would, like the dinosaurs, become extinct.

Last week I saw Kūmāré, a documentary about a man who invents himself as a spiritual guru, complete with a red-orange robe, wild hair and beard, made-up rituals, lineage and practices.  With the help of a yoga teacher and publicist, he tries to attract a following.  Disciples appear and, on camera, they praise  Kūmāré’s unique presence and his peaceful energy.  Over time, as he continues to embody his guru persona by emptying himself of his own personality and judgments to mirror the possibilities that already reside in others, the followers’ lives improve in visible ways.  One starts to wonder if he is more authentic than the “real” gurus shown in the film; some have been embroiled in scandal.  As we learn throughout the movie, Kūmāré’s goal was to show everyone that they don’t need him, or any other “guru” for that matter.  They are their own gurus, if they’re open to that possibility and can grant themselves an “A” for the people they aspire to become, rather than engaging in self-criticism and sabotage.

Seeing the film reminded me of when I first met Cheri Huber, an independent Soto Zen monk with a monastery in Northern California (like Kūmāré, she is not part of an established lineage).  I had been reading her books for years and appreciated her straightforward yet gentle and humorous approach to spiritual practice.  I was both attracted to, and also fearful of, the prospect of taking a closer look at my behavior patterns, personality and my cultural “programming”.  Before committing to an 8-day retreat, I wanted a chance to be around her and the monks for a shorter period of time.  Luckily, she was offering a day-long program in the Bay Area while I was visiting family in Oakland, so I went.  Unlike certain European monks, dressed in coarse floor-length robes with a rope around the waist, or Asian monks, hair shorn and garbed in brightly colored cloth, these monks wore street clothes and large wooden beads around their necks.  My first thought was that they weren’t “real”, it was all made up, and what was I doing there?  The program was broadcast over Skype to members of her global sangha.   The glitches – technical and human – were many, and my perfectionist critic used the mishaps to question whether or not these people were “for real.”  Yet, despite the snafus, not once did Cheri lose her temper or her patience.  For the entire day, she embodied conscious, compassionate awareness, a focus of her teaching to end suffering.   To use the Zanders’ terms, she gave everyone, and the situation, an “A”.   Witnessing such a possibility was, in a way, miraculous.

In the midst of a rugged, triple-peak hike yesterday, one which would have been inconceivable for me a few years ago, I thought of one Colorado Mountain Club trip leader (an accomplished mountaineer) who, shortly after I moved here, invented me as a strong hiker.  He always gave people on his trips an “A” and treated us like peers, even when I huffed and puffed in the rear or forgot a piece of gear.  Never did he lecture or condescend, like some of his colleagues.  As a result, everyone embodied his favorable assessment and vision;  his popular trips went off without incident.  Unfortunately, he’s moved on.  But now that I’m more confident about my ability, I am trying to give other, less skilled, leaders an “A” by openly appreciating their hard work and, inside, focusing on what they did right.

As with meditation and yoga, giving people an “A” is a practice.  It’s a particularly grueling one for me since my mind, if left to its own devices, immediately notices what is “wrong” or needs “fixing”.  It’s a mind prone to black and white thinking and incessant comparison with some built-in checklist of perfection.  Maybe I need to give my mind an “A”, and believe that one day it will forsake its polarities for the shades of grey in which invention, creativity and possibility reside.

Writer, Feldenkrais champion, Aikidoka and explorer of internal and external landscapes.
View all posts by ilona fried »
« Dental Chair Delight: Is it Possible?
Dispatch from an Olympics Grinch »

7 thoughts on “It’s All Invented”