Lessons from a Road Trip 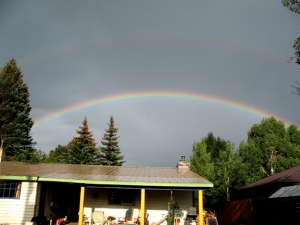 On Monday morning, I hit the road.  Meticulous planners will be horrified to learn that I made the decision just days before (maybe they are shaking their heads and clucking their tongues at this clinically extreme case of Last-Minute-Itis).  And that is exactly why I needed to take off, to give my inner perfectionist the finger and remind myself (again) that spiritual renewal can happen even on a quickly arranged trip.  On second thought, maybe it’s precisely the lack of thorough planning that allows the renewal to occur.  Sometimes adventure is the best medicine.

I had a bare bones outline to spend a few nights at the Wanderlust Hostel in Gunnison, CO, and explore that town and nearby Crested Butte.  Then I reserved a motel room in Ouray, CO, further south and west, known as “The Switzerland of America.”  Having spent a summer in Switzerland as a child, I was curious; I was also tempted by its hot springs.  I packed my hiking gear and swimsuit, bought topographical maps and asked a friend to suggest hikes.  I had a few in mind, but didn’t want to etch them in stone.  Once I’m on the open road, my adventurer takes over; I don’t want to hold that more spontaneous part of myself to an agenda that either my more ambitious (or lazier) self might have concocted.  Sketching makes it possible for new information to help paint the picture.

The day I left, a gauzy fog obscured the mountains.  I thought I’d drive straight to Gunnison (4 hours from Denver) and spend the afternoon exploring but, without the stunning vistas, my spirits sank.  Instead, I detoured to Salida, an artsy community I had visited before.  This time, I spotted a clothing store that was going out of business.  Amazingly, they had many items I liked; at 60% off, I couldn’t resist.  Before I knew it, an hour had passed.  Then the skies unleashed a downpour.  While waiting out the storm, I went through all the racks and tried on things for fun.  Eventually, I whittled my pile to three items.  As it turned out, this impromptu side trip (what a rigorous planner might call a “delay”) kept me from navigating a twisting mountain pass in torrential rain.   When I finally made it to Gunnison, I was greeted by a double rainbow.

A few days later, I chased the sunset in Crested Butte.  To attempt a photograph, I drove out of town, even though it was opposite the direction of the hostel.  I pulled over to the side of the road, rolled down the window and aimed my camera at the rosy glow behind the mountains.  Something caught my eye and I noticed a large herd of elk moving through a meadow a few hundred feet away.  I stood outside the car for a better view.  Of the many drivers that whizzed by that evening, just one stopped.  She told me that she had never seen elk that close to town before.  I stood transfixed by the magical scene.

At the hostel, a guest recommended I visit The Black Canyon, between Gunnison and Ouray.  I hadn’t heard of it but made a mental note.  As someone who considers herself a “mountain person”, canyons were not on my radar screen and I doubt I would have stopped there had I planned my trip more “thoroughly”.  The day I drove to Ouray I refilled my tank.  After awhile, in the middle of nowhere, I noticed a large sign for the canyon in front of a kitschy souvenir store.  Curious, I went inside.  The soft-spoken mustachioed man at the counter told me the canyon was worth a trip; it was just five miles to the entrance with seven more miles of paved road within the park, 24 miles in and out.  I had plenty of gas so I decided to check it out, thinking I’d be on my way in an hour or so.  Once there, I couldn’t tear myself away.  Four hours and dozens of photographs later I reluctantly drove off, grateful that I had not waited to gas up, grateful that my sketch of a day was filled by stunning beauty.

The hostel had a kitchen, so I bought a cooler and loaded it with the perishables in my fridge, plus bread, peanut butter, dried fruit and nuts.  During my unexpected canyon exploration, which involved several miles of walking, I stopped at an overlook and picnicked on leftovers and limeade.  Having healthy things to nibble meant that I didn’t need to interrupt my wanderings to get something to eat or, if decent food was unavailable, suffer hunger pangs and crankiness.  Even in the city, getting very hungry can ruin the flow of a day or curtail an impromptu errand if I have to go home or stop for a snack.

5) Don’t let the planners get you down (or, it’s the journey, not the destination)

Part of me had high hopes that Ouray would, indeed, be like Switzerland.  Perhaps the resemblance is more obvious in winter than in summer?  The town did have delicious chocolate and, separately, a Swiss born shopkeeper who asked me if I’d be continuing to Silverton and Durango, towns further south.  I told him that Ouray was my terminus.

“Well, next time, if you plan better, you can see those places,”  he said in an accent as thick as fondue.  A wall of cuckoo clocks ticked behind him.

There are many people like this Swiss man, who travel to an area and explore it intensely, or arrive with a checklist of things to see, restaurants to try or mountains to climb.  Not completing the plan might be akin to failure.  For explorers, this approach can be a recipe for disappointment and exhaustion.  There have been many trips where I succumbed to the voice of scarcity (“you’ll never come here again”), tried to see “everything” and, while running around like a maniac, became ill.  Squeezing in too much, or being too methodical, might not leave space for adventure or connecting with locals.

Ironically, the place I planned to see, Ouray, didn’t correspond to my imaginings.  And my planned activities, hiking and swimming/soaking, although enjoyable, did not fill my soul as much as that canyon or delight me as much as the lucky clothing finds.  To remain in adventure mode, I chose a more obscure route for the trip back to Denver.  It turned out that a detour off that route led to the canyon’s north rim, accessible by dirt road.  Although I was faced with a solid day of driving, and was somewhat fatigued already, I decided to visit it again.

My car kicked up dust and gravel crackled under the wheels as I motored toward the canyon.  At the first lookout, I walked the dirt path to the edge.  I stood and listened as the river, thousands of feet below, pounded the rock with patience and with fury.  It was an ancient and timeless sound.  It was the sound I needed to hear.

Writer, Feldenkrais champion, Aikidoka and explorer of internal and external landscapes.
View all posts by ilona fried »
« In Defense of Last-Minute-itis
More on Last-Minute-Itis »

3 thoughts on “Lessons from a Road Trip”