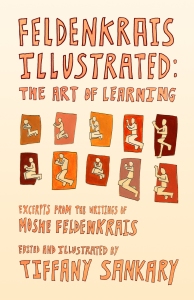 When learning, do not have any intention of being correct; do not act well or nicely, do not hurry, as this creates confusion – Moshe Feldenkrais

The Feldenkrais Method fosters and celebrates choice, so it’s wonderful to have two new introductions for those who wish to learn more or supplement their libraries. Feldenkrais Illustrated: The Art of Learning, by artist and practitioner Tiffany Sankary, and The Brain’s Way of Healing: Remarkable Discoveries and Recoveries from the Frontiers of Neuroplasticity, by Norman Doidge, M.D., both arrived in the mail recently. My idea, before I had opened either, was to write about them jointly. It was a great example of how my mind had raced ahead, one reason I practice Feldenkrais in the first place. Each deserves plenty of space.

Ms. Sankary’s book, more than a decade in the making, intrigued me before publication. She had shared a smattering of illustrations atop her Facebook page; gazing at the photograph of her scattered drawings had aroused both admiration and envy for her talent and tenacity. Even from the remove of the computer screen, it seemed she had found an ingenious way to breathe new life into Moshe Feldenkrais’ rich and dense writings by pairing selected quotes, such as the one at the top of this post, with her deceptively spare yet carefully wrought and highly evocative drawings. She began the project during her own Feldenkrais training, using ink and paper as a way to meditate upon some of Moshe’s ideas and deepen her understanding. In the introduction, she writes (and illustrates) that, “The process of making this book was parallel to the process of learning in the Feldenkrais method. The images come like an approximation of a movement. I don’t know what I’m going to get when I begin.”

That she used the method as a means of exploring it, and is inviting us to share the results of her process, is exciting and refreshing. It’s as if Ms. Sankary has created a new pathway for experiencing Feldenkrais, bringing it from behind the closed doors of private sessions and group classes into people’s hands. Also refreshing is that her visual distillation of themes that emerge in Feldenkrais’ work, painstakingly culled from several sources, “makes the impossible possible” for those who might find his original texts daunting. Indeed, she began drawing the quotes as a way to help internalize the material during her own Feldenkrais training. Having read the sources from which she drew her inspiration, I sensed the interconnections yet couldn’t put my finger on them (nor, frankly, did I even try). Ms. Sankary, with patient persistence, figured that out. She divided her book into 25 distinct sections that can be enjoyed sequentially or spontaneously. Each offers tantalizing visual and textual bites that might encourage readers to consult the references at the back and, as a next nibble, find the source and read the paragraph or page from which she selected them. Perhaps, over time, readers would slowly absorb more of Moshe’s original texts.

Sitting down with Feldenkrais Illustrated, I wondered whether she and I would share favorite snippets or if she might, through her drawings, invite me to reinterpret something or bring to my attention, in a more visceral way, ideas that hadn’t penetrated before. Those were valid curiosities, and yet they soon became an afterthought. After a few minutes, it dawned on me that each page acted like instructions in a Feldenkrais Awareness Through Movement lesson, quieting my mind. The absence of page numbers invited me to simply sit with each one, rather than expend even a smidgen of mental energy calculating how much I had read or how much remained. To fully appreciate and immerse myself in the drawings and the accompanying texts, I had to slow down and connect with my breathing, much as I would to sense my body in a Feldenkrais lesson, and allow the image and words to penetrate. The book had become a teacher, albeit a silent one, inviting me into a deeper experience in which the distinctions between text and image began to blur, as if they had emerged seamlessly from the same creative springs.

When I arrived at the last page, I knew I’d return to the book frequently, both to be reminded of Moshe’s key ideas and to further study her drawings, many of which deserve sustained consideration (preview some compelling illustrations here: Chapter 7: Habits). And I wondered, might there be, if not a sequel, then a companion book? Since I once identified as a visual artist and eventually changed hats, I’m aware that Ms. Sankary might also choose to redirect her talents and never pick up pen and paper in quite the same way again. If that is so, so be it. But, if she is inspired and could secure permission (no small feat), perhaps she might illustrate snippets from the training program Moshe Feldenkrais conducted in Amherst, MA in the early 1980s, his last one before he died in 1984. Charismatic and a gleeful provocateur, he uttered many gems which largely remain cloistered, such as: “Logical thinking is the lowest grade of thinking” (June 10, 1980); and “Life is beautiful, simple, comfortable…and exercise is a bloody nuisance.” (June 12, 1980). I would jump for joy if she embarked on such a project. In the meantime, I’m delighted and deeply grateful that she birthed Feldenkrais Illustrated, a long anticipated and much needed contribution that stands on its own.

Interested in trying Feldenkrais at home? I’ve helped create the text for Tiffany Sankary’s Movement and Creativity Library, with 150+ lessons. Subscriptions are monthly. You can also support this blog, a labor of love! Join my e-mail list or contribute.

Writer, Feldenkrais champion, Aikidoka and explorer of internal and external landscapes.
View all posts by ilona fried »
« It Takes a Village to Go Viral
Yoga is a Four Letter Word »