Forking Over My Utensils 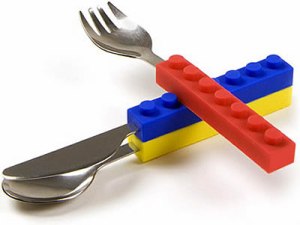 Simple yet colorful. Perhaps one day I’ll downsize to this Lego set.

Last week I spent four nights at a private home while attending the Wake Up Festival.  I saw photos and read the description (“simple, sustainable”) before booking the room.  Still, I was surprised by the modesty of the place.

“They really have nothing,” commented a voice in my head as I surveyed the living room, furnished with a futon couch, a chair upholstered in fuzzy lime green, a shaggy beige carpeted scratching post, and a tiny desk in the corner.  Salmon pink curtains dangled limply from a rod above a picture window.  Art hung at random intervals.  While I appreciate à la carte decor, my brain reacts to visual disharmony and signals me, via a disquieting twinge, to do something about it…Now!

“You should leave,” said the voice.

Having a keen eye is a boon with creating art and proofreading, but is otherwise a bane of my existence.  Had I been a cave-dweller, it would have saved me from picking poisonous berries.  Nowadays, being able to instantly spot dead light bulbs, carpet stains and anything off-kilter is not a survival skill (unless you’re a facilities manager or art installer).  Over time, I’ve learned to shift my focus away from aesthetic “errors” so I can concentrate on the people around me but sometimes this reflex pops up anyway.

My room was as advertised: bright and clean.  I unpacked and hung my clothing in the closet.  Kitchen and bathroom aside, there was only one other room in the house, the owners’ bedroom.  I wondered how the couple managed with just one closet.  Their kitchen, filled with a bright red table and vinyl chairs, was similarly sparse.  A few cast iron pans, salvaged and seasoned, hung above their gas stove.  A toaster and blender, thrift store finds, sat unplugged on the counter.  They had no dishwasher.  The washing machine was European in design, a top loading cylinder that hooked to the faucet.  Chickens clucked by the vegetable garden in the back.  Out front, they hung their clothing to dry.

Since I was attending a spiritual gathering, I decided to approach this arrangement as a student rather than critic.  What might I learn from my hosts?

As I got to know them, I started to envy their uncomplicated and uncluttered life.  They both worked, but their passion was the outdoors; their bookcases bulged with travel and rock climbing guides.  A few family photos hung on a wall; there wasn’t space for album upon album.  It made me wonder how much of what I’ve accumulated I still want or even need.  Many of my possessions have, for sentimental reasons, survived multiple moves and purges.  There are items from my late father’s estate that I can’t part with, even though each year I let go of a little bit more.  As a writer, I accumulate paper scraps, note cards, and post-its scrawled with ideas and random thoughts; I hesitate to throw any away, lest they hold the key to…a breakthrough?  While I don’t own much gadgetry, my own living space is not nearly as pristine as my eyes demand.

On the second day, they told me they were going away for the weekend, leaving me alone with their cat.

“You’re very trusting to let a stranger stay in your house,” I said.

“It’s not as though we have anything valuable,” the man said.  Which was true, and not.  Their valuables — proximity to the mountains, vitality, simplicity and peace of mind– could not be stolen or vandalized.

When I returned home, I wondered what I could without.  In my kitchen, I stared down my crowded utensil drawer.  Since I don’t entertain large numbers of people, I didn’t need the dozen or so mismatched knives, random forks and an eclectic assortment of spoons, some of which my family used in my childhood home.  I couldn’t remember how I acquired the others.  Why was I hanging onto this motley crew?  Towards the back of the drawer I saw a small set of coordinating cutlery for four, still wrapped in plastic, whose origins also escaped me.  Was I saving it for a special occasion?

There was a time when I associated matching cutlery with lock-step conformity, which is why I never used them.   But, it occurred to me that identical silverware is a time saver.  I can grab any fork, rather than rummaging for one whose tines aren’t slightly bent or too dull.  I put the hodgepodge silverware in a spare utensil tray and delivered them and a few other things to Goodwill.  It was, at least, a start.

Writer, Feldenkrais champion, Aikidoka and explorer of internal and external landscapes.
View all posts by ilona fried »
« The Power of Nature
Cleaning up a Creek, Cleaning up Karma »