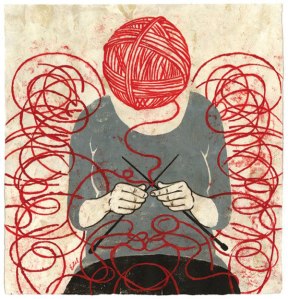 Would knitting tie my ego into knots, or quietly unravel it?   (Illustration by Edel Rodriguez).

For years, I’ve had a knotty relationship with knitting.  As a teenager, I envied friends who, having learned the skill from their mothers, aunts or grandmothers, whipped up scarves and sweaters.  In my freshman year at college, I decided to learn, and took a lesson at a yarn shop down the road from my suburban Philadelphia campus.  Thinking it was a skill I “should” be able to master quickly, I was stymied by dropped stitches and other mistakes.  And I was loathe to keep asking for help from the impeccably groomed Main Line matrons who ran the store;  their apparent cushiness and comfort made me feel even more awkward and inept.  After knitting a few inches of a purple vest, I gave up and stuffed it and the remaining yarn in a plastic bag.  Eventually, I surrendered the stash to a friend.  Part of the problem was my choice of timing.  Overwhelmed by a full course load, a part-time job, and the newness of college, I couldn’t give this hobby the focus it required.

Last month, seeking a creative outlet while healing from an injury, I decided to revisit knitting.  I’ve always loved the textures and colors of yarn and that, unlike many media, it’s portable.  While other people fiddle with digital devices, I could entertain my own digits with needles and yarn, transforming down time into something tangible.  I signed up for a class at one of Denver’s yarn shops.  During the first lesson, after a few false starts, I learned to cast the chunky yarn onto a straight plastic needle.  The teacher had us knit a few rows, unravel it all, cast on again, knit some more.  We learned how to bind off, removing what we had knitted from the needle. Then we unraveled that, too, and started again. It felt like Zen practice, with the focus on process rather than results.  It was a reminder that repetition is the foundation of any rewarding endeavor, that we shouldn’t get too attached to specific outcomes.

After two sessions the teacher suggested we pick a project.  Feeling ambitious, I chose a scarf with a simple pattern, so I’d have some variety and challenge, instead of simply repeating the knit stitch.  I purchased new red yarn, finer than what I had been using, and circular needles.  My fingers fumbled with the thinner materials.  I despaired as stitches kept slipping off the needles’ ends.  Eventually, after casting on the required 39 stitches and painstakingly creating a few rows, I realized something didn’t look right.  Remembering our first day, I sighed and unraveled the whole thing.  I started again, determined to not make any mistakes.  As I approached the end of the third row, a bunch of stitches slipped off.  I thought I had my eye on it, but clearly my attention had wavered.  Spluttering a curse, I chose to undo my work.  That seemed less harrowing than coaxing the wayward stitches back onto the needle, a task requiring both a surgeon’s steely concentration and a lover’s tenderness.  With 15 minutes left, I started afresh.  But with one eye on the clock, I made even more mistakes and was left with a knitting mess.

Sitting in my Subaru after class, I thought of my Zen teacher, Cheri Huber, and one of her favorite sayings: How do you anything is how you do everything.  Regardless of the content of our lives, be it cooking, working, driving, writing, eating, or exercising, we bring the same process and habits of mind to these activities.  Do we rush? Procrastinate?  Get irritated with ourselves for not doing things “right” or fast enough?  If we alter our internal approach to a task, we’ll likely have a different quality of experience and, maybe, a more fulfilling result (no guarantees).  Was I “doing knitting” much the same way I did it decades ago:  quickly, wanting to produce a flawless result on my own, even though those expectations were unrealistic? Was it possible that, after years of meditation and yoga, I hadn’t changed at all?

I decided to prove to myself, right then, that my spiritual practices had not been for naught.  I stared at the needles and yarn on the passenger seat and decided I would no longer allow them to tie me into knots.  To give myself more elbow room, I pushed back the driver’s seat.  Although my car was parked, I wanted to shift into “neutral”, that elusive space of receptivity and non-judgment, where time seems suspended.  I closed my eyes and breathed deeply until my shoulders softened and my belly became as soft as a pile of wool.  I unraveled my most recent efforts and gently wound the curled yarn back onto the ball, as if for the first time.  Picking up the needles, I cast on again as I inhaled and exhaled, one stitch per breath.  As I started on that tricky first row, I worked one stitch at a time, being sure to keep them away from the needle’s perilous edge.  Without a sense of urgency or distractions, my eyes, fingers, yarn and needles collaborated – effortlessly and miraculously – to create several rows.

The hardest part about knitting, it turned out, was being present.

Writer, Feldenkrais champion, Aikidoka and explorer of internal and external landscapes.
View all posts by ilona fried »
« Quoth the Maven, “Yelp No More.”
If Patience Were a Vitamin, I’d Take the Whole Bottle »

12 thoughts on “Knitting as Zen Practice”