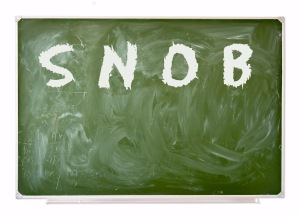 The first time I was called a snob, it wasn’t to my face. Rather, it was written in a bathroom stall in the girls’ locker room at my high school.  To see my name and my boyfriend’s inked and linked with “snob” stung, even more so since my pants were down.  I was 15 and going out with a fellow sophomore who was the best dressed and the best looking in our class.  He and I had met by accident the year before, in my local public library, and attended junior high schools in different towns.  That we first got to know each other far from the gossipy glances of other teenagers likely allowed the romance to blossom in the first place.  That I was smart, relatively quiet and not terribly fashionable probably pissed off a few girls in the popular cliques, who might have believed they should have had first dibs or that I owed them some kind of obeisance, or attempt to get their approval.  “Snob” was a quick way to take me down.  I chose to leave the words alone simply because, to cross them out or mark over them, would have encouraged more.  And I didn’t want whoever penned the graffiti to know that I gave a damn.

But I did know then that to behave in a way that was not authentic was far worse than being called a “snob”.  To try to gain acceptance by a group when I had no interest, or to fake smile my way through the day and say “all the right things”, even if I didn’t believe or feel them in that moment….well, that didn’t make sense to me. Then, however, I had no idea what an introvert was and that I was one.  And as many deeply misunderstood (if not marginalized) groups know, an effective way to stand up to bias is not to explain, sugarcoat or whitewash differences, but to reclaim them by re-framing slurs and other derogatory terms.  In that spirit, I am remaking snob into S.N.O.B.  Here is how I define it:

Sensitive.  While not all introverts are, like myself, highly sensitive, introverts by necessity have to be sensitive to their energy levels.  Since group activities and lots of conversation (especially if it’s not focused, deep or intimate) drain rather than charge introverts’ batteries, awareness of how we are feeling, and how that is changing from moment to moment, is paramount.  And because of that sensitivity I won’t fill my schedule with plans involving others, or commit to certain activities far in advance, since I no longer run on empty for the sake of appearances or to fulfill the cultural norm  that it’s “wrong” to turn down opportunities to socialize.  Even with proper planning for an energy consuming event, like a conference or family occasion, I might still need to excuse myself in the middle to recharge.

No nonsense.  Unless we are having a deep, engaging conversation, on a mutually agreeable topic, in most situations requiring conversation I prefer to get to the point.  If we are not having an intimate or focused exchange, I don’t want to be your audience, nor do I wish to entertain you.  When folks circle the issue in linguistic loop-DE-loops, repeat themselves ad nauseum, or travel along trek-length tangents, well, that makes me feel like an airplane that’s increasingly low on fuel yet forced into a holding pattern because there is nowhere to land.  In order to avoid disaster, I will try to steer you to what I believe was the original point.  You might not like this, but it’s preferable to me crashing and burning in front of you into crankiness and irritability.

Obstinate.  Introversion can’t be changed, please don’t tell me to “get out more”, hang out with large groups of people or otherwise mimic what extroverts do, like “work a room”.  Sometimes I do these things anyway, to stretch myself, but mostly I prefer to hold my original shape so I don’t snap.  And if I invite you to a gathering and the small (to you) number makes you uncomfortable, or makes you wish had accepted a “better” offer…Oh. Well.

Boundaried.  I have no idea how the cultural norm evolved that we should be “cheerful”, “available”, “flexible” (especially women) and “dynamic”.  But whoever concocted this ideal did not consult introverts, who don’t thrive when frequently interrupted and are not always able to flash a smile on demand.  If I were to be “available” whenever anyone called, it’s likely I’d sound grouchy if I picked up the phone when I was in the middle of something, my lips not curved upward because I was thinking or trying to concentrate.  Unless I am expecting a call, I rarely answer, preferring to let it go to voice mail so I can get back to the person when I’m able to focus my attention.  And then there are time boundaries.  Like an airplane being prepared for a trip of a certain length, when I set out for the day I fill my invisible introvert energy tank for the activities planned, plus a little extra.  What I’ve observed is that when events or meetings start and/or run late, especially in the evening, it depletes my reserve.  So I leave when I need to, even if the activity is not over, even if the person in the front of the room is still yakking away, oblivious to the time.  I leave not out of rudeness or impoliteness, but out of friendliness towards myself.

Writer, Feldenkrais champion, Aikidoka and explorer of internal and external landscapes.
View all posts by ilona fried »
« Notes From the Potato Patch
When Curiosity Beckons »