Notes From the Potato Patch 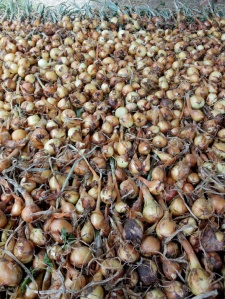 Creating a shallot “mosaic” in the shade was easier than plucking potatoes.

While I’m terrible with houseplants and have never tried gardening, I’ve long had an unexplored curiosity about how food is brought from the earth.  Traipsing through hundreds of miles of vineyards and other agricultural land in Spain last fall, along El Camino de Santiago, brought that interest closer to the surface.  And now I’m living in a part of Boulder, CO that is surrounded by farms; driving into town, I see cows, horses, prairie dogs and even alpaca.  Last Thursday I volunteered at Cure Organic Farm, 10 minutes away, whose store I had visited a few times.  Shortly after I arrived at 9 a.m., Tory, one of the interns (and a fellow Massachusetts native) handed me yellow gloves stiff with dirt.  I followed half a dozen other volunteers down a path to weed the herb garden.  With small hoes, we cut away grasses and other intruders from beds of purple basil and pale green oregano, the fragrance suspended in the slightly damp air. It was a gentle, meditative start to the morning.

Next we piled into the backs of a truck and a rattling white van, a hollow metal shell that hauls produce to the farmers’ market, and headed to the potato fields just up the road.  Decades ago I drove such a vehicle when I had a house painting business.  Back then, in the driver’s seat, I was on top on the world, but perched atop the right rear wheel as the van bounced along I noticed the faintest stirrings of powerlessness and dependence, a fraction of what a migrant worker might feel.  When we clambered out of the van, other farm staff — all strong, cheerful women — gave us bright orange baskets and instructions for harvesting Yukon golds, reds, and purple potatoes.  As I squatted in the dirt and plucked tubers, I realized that their directives offered some lessons for life.

“The potatoes have very thin skin, so don’t try to scrape the dirt off, unless it’s a big clump,” said the t-shirted farm gal driving the spinner, a small tractor towing a device that uprooted the tubers, making it easier for us to harvest.  “We’ll soak them later.”

I wondered if we were handling the humble potatoes with greater care than we treat ourselves, with our figurative thin skin.  Being mindful to not damage the potatoes’ surface meant overriding the urge to beautify, to clean them up.  In our sterile culture, where dirt — according to many advertisements — is an enemy, how often do we recoil from it or reject anything covered with it?  And the same might be true of our reactions to the “dirtier” or “uglier” parts of ourselves.  We might try to vigorously erase or camouflage those aspects of our personalities or appearance that we don’t like or that don’t conform to a cultural norm.  Soaking ourselves in kindness is a slower, but ultimately more effective, way of letting what is not true for us fall away and allowing our authenticity to emerge, no matter what it looks like.

“Pick the small ones, even the tiny ones.  We’ll sort them later.”

Since the farmers wanted to use that field for a different crop next year, they didn’t want any potatoes left behind that could re-sprout.  I held up the plants to inspect the roots, making sure I had removed even the potatoes that were the size of my pinky finger nail.  And I came across one X-rated purple potato, shaped like male genitalia.  I held it aloft.

“You can keep that if you want,” said one of the farm interns.

“That’s OK.” I tossed it into the basket. “I’ll let someone else have it.”

“There are customers at the farmers’ markets who go for the odd looking vegetables,” said another.  I was glad to know people celebrated and sought out the offbeat, even if their unusual shapes make such foods harder to peel or slice.  Ditto with our quirks.  Better to actively embrace them and trust that they belong somewhere in the world, rather than reject them out of hand.

We spent just an hour in the potato patch before shuttling to the main farm to sort garlic and shallots under a canopy.  Still, by the time I climbed into the van, my shirt and pants clung to my skin.  Sweat trickled down my neck and glued my straw hat to my head.  Even though I had enjoyed harvesting, my body had had enough of the heat.  I couldn’t imagine being a farmhand or laborer, crouched for hours in the sun, day after day, carrying heavy baskets, in the worst cases skipping food and bathroom breaks to fill a quota.  I thought of how, when shopping, I inspect produce and often think to myself that it’s “too expensive” or internally kvetch about the quality, completely oblivious as to how many hands and hours were needed to bring the food to market, unaware how much of the harvest might have been donated, discarded or fed to animals because it didn’t look quite right.

At the end of the volunteer shift, we piled into the van one last time as Tory drove us to the farm’s cold storage area.  This time, I sat in the passenger seat.  She handed us plastic bags and invited us to pick out produce for our efforts.  I chose a few petite zucchini and asked about the sweet turnips, rubber-banded into clusters.  Tory mentioned that a man bought $30 worth of turnips the day before for his wife, who eats them like apples.  That came to $3/bunch.  I picked one from the cooler.  As I placed into my bag, I marveled that the price wasn’t  a lot higher.

Writer, Feldenkrais champion, Aikidoka and explorer of internal and external landscapes.
View all posts by ilona fried »
« What Does it Mean to “Arrive”?
Yes, I am a S.N.O.B. »

2 thoughts on “Notes From the Potato Patch”