A Tribute and a Request 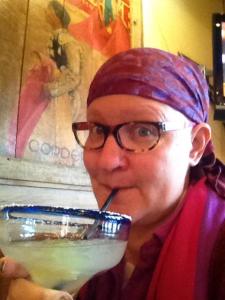 In March, I wrote about the passing of Robyn Richey Piz, a fellow writer and co-founder of Salon Denver.  She and her friend Christy Bailey invited me and a dozen others to this monthly gathering of writers to share works in progress and inspire each other.  Some ‘salonistas’ who read that post had lovely things to say about it.  Inside, I felt like the world’s biggest coward because I had never expressed my thoughts and feelings to Robyn before she died. Robyn was a brilliant writer, and her invitation to Salon felt like a huge honor and a vote of confidence in my fledgling craft. Yet, I never told her so. I missed opportunities to visit her while her health allowed. As her condition deteriorated, my fears of seeing her waste away overwhelmed the tiny voice inside that wanted to express itself. I vaguely believed there would always be more time, or I would be more brave. To this day, I deeply regret not mustering the nerve to express what she meant to me in person. It’s a mistake I don’t wish to make again.

Christy’s own health took a turn for the worse while I was walking the 500+ mile Camino de Santiago (from which I returned with a leg injury).  After Christy prevailed over breast cancer a few years ago, the disease returned last fall with a vengeance. Saving her life became a full time job, requiring that she leave a hard-won and much loved teaching position in Colorado to save her strength for treatment in Houston, including a double mastectomy. To my amazement, she created a secret fan club on Facebook where she posts unflinchingly about her treatments, surgeries, medical and other misadventures and how she’s handling it all. Despite my occasional desire to avert my eyes from gruesome details, I force myself to read. At times, her words have brought me to tears. Many people in that situation, myself included, would have just hunkered down and shut out the world. Christy, as fearless as she is friendly, invited many people in, enlarging us all in the process.

Although our personalities are opposite, she and I share a passion for travel, language, hiking, writing and bold colors. Like me, she is unattached. While reading about her off-the-charts pain, post-surgical complications and skin grafts that have turned her body into a crazy quilt, I have often wondered if I would tolerate such disfigurement to stay alive. Many people endure invasive medical horrors to survive for their children or a spouse, which is brave in itself. But it seems doubly courageous to choose to live at any cost when life itself has catapulted a person far beyond the confines of “normalcy” into uncharted territory, with zero promise that old hopes will be fulfilled.

Christy, although she prefers margaritas to meditation, is truly a spiritual bad-ass.

Her costs are mounting as high as the peaks she once climbed.  Health insurance for a long-term cancer patient is like a tiny band-aid on a gaping wound. There are eyebrow raising co-pays for special medications (not to mention regular co-pays for doctors and prescriptions), out of state lodging costs, and flights to and from Houston for her and her parents. Not to mention new clothing and shoes to accommodate movement limitations and numbness resulting from side-effects and surgeries (and the occasional, spirit-lifting margarita). These are the details often missing from pinkified packaging and ribbon-wrapped fundraisers for cancer research, which are sanitized of the pink (but not pretty) images of scars and skin grafts. Too often, the culture focuses on someone “beating” cancer.  When the suspense is over, and we know they’ll live, it’s easy to turn our attention to the next saga that reifies the American narrative arc of struggle to triumph.  We applaud when someone is deemed cured, even if that’s just the beginning of their ‘Camino’, a long slog of recovery, their life forever altered. We don’t often shine the spotlight on people who survive only to face a mountain of expenses and few resources with which to pay them, through no fault of their own.

Christy’s magnanimous and keenly observed responses to her struggles have kept me going on days when I believe that my leg will never heal or when I otherwise succumb to despair when mistaking a temporary condition (real or imagined) for a permanent one.  Her willingness to share openly about her life has inspired me to crack my own shell wider and reveal more about myself in writing and with people I meet. Over time, I’ve been privileged to hear sections of her memoir-in-progress (about living with alopecia) that she began writing before this ordeal.  I’m convinced she now has at least another book in her and much humor-infused wisdom to offer the world about her experiences.

If I could, I’d wave a wand and zap her medical bills into salt crystals for future margaritas. Instead, I’m auctioning two pieces of my mosaic art, that speaks directly to her journey, on her behalf.  Bidding ends the morning of December 10.  If participating in the auction is out of reach, I’m asking readers to make a direct donation of any amount to Christy, whose life and writing often fuel this blogger and this blog. The sentences and paragraphs you peruse and share would not be here without her and the salon she co-founded. Thank you.

[it seems that the donation link is temperamental.  If it’s not working, please e-mail me (menu@alacartespirit.com) and I’ll send it to you directly]

Writer, Feldenkrais champion, Aikidoka and explorer of internal and external landscapes.
View all posts by ilona fried »
« Goodbye, Gluttony! Dispatch from a Contemplative Thanksgiving
The Vagina Monologues and My Narrow Escape from the Age Silo »

7 thoughts on “A Tribute and a Request”