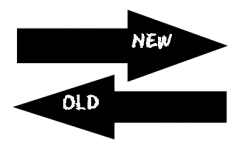 Sometimes the past visits in unexpected places. On Tuesday, I dropped off yet another donation of stuff. Normally, at this collection center, a brawny and frequently tattooed employee pushes a wheeled bin toward my car or approaches to help unload as I pull up. This time a slender man in his 60s ambled by as if strolling in the countryside.

“You can put the things over there,” he said in an accent both familiar and mysterious, casually pointing towards a cluster of wheeled bins several yards away. Having spent much time schlepping, unpacking, repacking and shipping things, putting a bit too much pressure on my tendon, I didn’t want to carry anything any further than I absolutely had to.

“Can you take them please?” I asked, tilting my head to meet his gaze.  He must have been at least 6’3″. A gray mustache and somewhat angular eyebrows adorned his long narrow face, which I would call handsome, even elegant, save for some missing teeth. I still couldn’t place him.

“Of course,” he said. I handed him a torn leather rucksack I bought in Budapest in 1990, where I had lived and worked after college. I had filled it with things I no longer wanted.

“Be careful, there is some pottery in it,” I said. With regal posture and without hurrying, he walked over to one of the bins and deposited the rucksack beside it. When he returned to my car, I handed him a pink fabric Whole Foods bag, packed with stuff. “I’ll need that bag back.”

Without adjusting his pace, he brought it to a different bin and emptied it. He approached me with the pink satchel.

“Don’t you want this?” he unfolded his left palm, revealing a necklace. It was one of my late great aunt’s many costume jewelry items, most of which I shipped to my sisters-in-law and nieces in Massachusetts more than a year ago. This necklace, somewhat old world with filigree beads and a matching pendant, I had kept. Not to wear, but to look at occasionally, even though I had never seen it on my great aunt. During a recent and rare expedition into my jewelry box, filled largely with relics of past lives and feeling weighty in my hand, I saw the necklace as just a reminder of my propensity to hang onto things I neither use nor need.  That he thought it might be valuable made me doubt my decision for just one second.

“May I ask you where you’re from?”

“Turkey,” I said, aware that he was likely from the East. He shook his head.

“I’ll give you a clue. I’m from the same country as Roman Polanski.”  Before I had a chance to respond, he regaled me with the film maker’s sordid story.

“Poland,” I interjected during a gap in his monologue. I wondered why he had referenced the controversial Polanski rather than Lech Walesa. “I visited once, a long time ago.”

“Where did you go?” He toyed with the necklace.

“Warsaw, Krakow, and another city I can’t remember.”  I decided to omit the visit to Auschwitz, which my father survived. I sensed that it would be like throwing a grenade into the interaction and I didn’t have the energy to deal with it.

“Was it Wrocław?” he asked. The word fell like a soft somersault from his mouth.

“Yes, that was it. I was on a college trip and we visited a factory there. Where are you from?”

“Warsaw. But…” He shrugged. “Now I’m here. I just don’t like being around blacks.”

I’m not sure why he chose to confide that to me, just as I’m not sure why other strangers, over the years, have felt comfortable sharing intimate details without my prompting them. To be the repository of others’ confidences is a strange role I have unwittingly played; it’s unclear to me how I invite these confessions and admissions. Perhaps he found my features familiar and believed I’d be sympathetic.

“I can’t use the word niggers here,” he said, sotto voce. “Or I might get fired. In Europe, we could say whatever we want.”

I raised my eyebrows. This man’s slight resemblance, more in manner than appearance, to my late Hungarian father mitigated the harshness of his conversational grenade. Having been unable to budge many of my father’s old world attitudes (which did not involve the “n” word), I knew there was no point in schooling this old school man. And there was no point in taking offense, either. The only thing I could do was feel my heart break at being reminded, again, that the most charming facades and the most proudly cherished identities often mask intense fear of or contempt for “the other”.

“They had their holiday yesterday,” he said, referring to Martin Luther King day.  Their? My eyebrows nearly popped off my forehead.

“There is even a black president here!” That he hadn’t yet absorbed this reality made me feel a bit sorry for him, a stranger in a foreign land in the latter part of his life. Perhaps this man had forgotten why he had come to the United States in the first place, a question I did not get a chance to ask.

“I happen to like Obama,” I said, placing the pink Whole Foods bag on the passenger seat.

“But he didn’t do everything he said he would.” He draped the necklace over his fingers.

“True, but he’s better than the alternative.” He started another spiel about John McCain and Sarah Palin. I shut the passenger door and prepared to leave.

“Thank you for your donations,” he said, in a tone more typical of a tuxedoed maître d’ than an aproned employee, bowing his head slightly. As he ambled toward the building, I saw him clutch the necklace more tightly. I wondered if it reminded him of home. If so, I wouldn’t have minded if he had kept it.

Writer, Feldenkrais champion, Aikidoka and explorer of internal and external landscapes.
View all posts by ilona fried »
« Who Are We, Anyway?
Reclaiming B.I.T.C.H. »

2 thoughts on “Trading Old for New, East for West”