Road Trip as American Camino: A chance to “shunpike’ 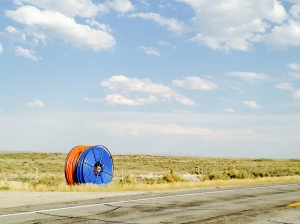 Shunpiking. This stretch of Wyoming road is off the grid, for the time being.

The word “shunpike” just crossed my radar. From “shun” and “turnpike”, it originally referred to avoiding toll roads, but can now mean preferring lightly traveled country roads instead of highways, whether fee-based or not.  El Camino de Santiago and a road trip offer a choice of “way”, both in terms of the different types of surfaces, and also in how they are traveled.

At the beginning of my road trip, with exactly enough time to get to the Bay Area from Santa Fe, I stuck to highways, eager to make good time. Then, it was exhilarating to quickly cover a lot of ground. At the beginning of the Camino, too, influenced by the collective exuberance of fellow walkers, I often found myself walking faster than was ideal for me. As both journeys unfolded, however, the shift from euphoria into more of an equilibrium and the sloughing of borrowed expectations allowed me to settle more into my own pace. Still, it took many miles (hundreds on the Camino, thousands on my road trip), for the external noise to quiet enough and for my weariness to slow me enough to allow my internal compass to guide me, sending me to places and even hotels that my “conventional mind” might have rejected earlier in the journey..

Spiritually speaking, weariness is not always a bad thing. With less energy to feed the ego’s endless demands, comparisons, complaints or requirements, or to carry the armor of identity, resistance to what is right here, right now, melts away. Towards the very end of the Camino, stiff-legged and in a sleep deprived trance, I felt enormous gratitude if an albergue offered the basics: heat and hot water. Appearances and extras, such as fresh blankets or vending machines dispensing cafe con leche stopped mattering, which is how I spent one night on a bottom bunk bed in a boxy metal shipping container with rusty shower stalls and a space heater, a setup I would have rejected at the beginning of the pilgrimage as not being “nice enough”. That other pilgrims I saw earlier that day had continued two kilometers further to the more popular lodging turned out to be a huge gift. I had the place to myself. With no one around to snore, cough, or squeak the beds, I experienced a rare night of restorative sleep.

While visiting the Washington Peninsula, I arrived to the town of Forks close to 6pm, with many motels fully booked. I pulled into the parking lot at the Far West Hotel, whose charmless exterior, a “for sale” sign out front, and proximity to a ramshackle building gave me pause. In the office, the gap-toothed sixty-something Vietnamese proprietress told me she had just one room of seven available. A man checking in, with plans to hike the nearby mountains, told me he had booked this hotel months prior. The town had few beds available. I went to see the room; despite the hotel’s lackluster facade, it had a freshly remodeled bathroom. Again, I was reminded that appearances can deceive. Returning to the office, I spotted the owner busily folding towels in a back room.

“I’ll take it,” I said. She hurried to the desk and handed me a registration form. I asked her why the hotel was for sale. She said her husband, who now lives in Port Angeles, WA, about an hour away, wants to retire.

She complained that her husband calls frequently, making it hard for her to clean and take care of hotel business.

“He couldn’t find his keys,” she said, voice rising. “Does he think I can see over there?”  She gesticulated behind her to the far distance. I laughed out of gratitude that she felt comfortable sharing this with me, instead of keeping it to herself behind a so-called professional facade.

“He needs to figure things out for himself,” she said as she swiped my credit card. Filled with appreciation for her industriousness and independence, I was glad to have found my way to her tiny albergue, her simple slice of America.

3 thoughts on “Road Trip as American Camino: A chance to “shunpike’”