The Perils of Travel (and Food) Snobbery 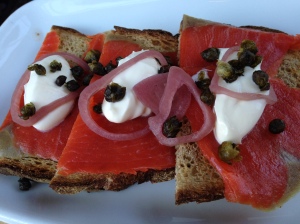 Is it possible to fully enjoy food while comparing it to a repast from the past? [for the record, this is NOT the salmon belly mentioned in my post. It is smoked salmon]

Comparison is the thief of joy. – Theodore Roosevelt

As a fairly well-traveled person with an educated palate, I once took pride in having sampled authentic cuisine in dozens of places around the world. Too much pride, at times. Having tasted what I thought was “the best” or “the truest”, I couldn’t comprehend how many Americans enjoyed meals that I deemed bland, unsophisticated or hideous (to this day, tuna melts make me cringe). Often, I failed to enjoy gatherings because the food did not live up to an ideal. It was as if the quality or originality of the victuals became a barometer for the people and the experience, an excuse to evaluate and separate rather than appreciate and connect. Frequently I allowed my opinion of the food to keep me at a remove. Some of these attitudes were reinforced by my late Hungarian father, who kvetched for years that he couldn’t find decent bread near our suburban Boston home. Folks who swore by Wonder Bread might be shocked that, in our household, it was not the staff of life but a bizarre facsimile that wasn’t allowed through the front door. Eventually, a specialty foods store opened nearby whose fresh baguettes ended that particular lament. He had other food related complaints, many legitimate; I fed on his words and internalized them.

It’s one thing to appreciate buttery croissants in Paris, raclette in Switzerland, grilled octopus in Portugal, fresh Pad Thai from a Bangkok street vendor, decadently rich cuisine in Hungary, complex mole sauces in Mexico and falafel in Jerusalem. It’s another to create an expectation that subsequent eats must live up to memorable meals from faraway places, or to launch a kvetch-filled quest to replicate them (I’m in favor of humor-filled quests). And still another to believe, as I did for years, that the food available in this country was somehow less than what was produced in other countries. My belief had a basis in fact, given the prevalence of highly processed products.  Since then, food culture has changed for the better in many parts of this country, yet my earlier mindset has been slow to adjust to the current reality of farmers’ markets, artisanal producers and a larger variety of imported goodies. If I’m not vigilant my mind can easily put other cuisines on pedestals and convince me that America still hasn’t graduated from culinary kindergarten. Yet, to live in one place and have one’s tastebuds longing for another is to not inhabit either. It’s like being a permanently displaced person, unsure where home is, even with a roof over one’s head and food in the fridge.

Spiritual practice, particularly cultivating gratitude, can help anchor displaced persons such as myself in the present, whether I’m savoring a fine brie or munching on string cheese. Can I appreciate the chewy convenience of the cheese stick while adventuring, without comparing it to cave aged Gruyère? On my road trip, I managed to do that. Most of the time, I am still more present to mild dissatisfaction than to gratitude, but a recent meal with an acquaintance helped me realize that meditation has, oh-so-slowly, nudged my orientation from “there” closer to “here”.

We had lunch in a quaint Colorado town, at a popular restaurant recommended to each of us independently; the likelihood of it being a letdown was low. We both considered the salmon burger. I understood “burger” to mean that the fish would be ground and mixed with other ingredients. I ordered it without hesitation and with string fries. My well traveled and accomplished acquaintance asked the waitress if it was a patty or a piece of salmon.

“It’s a patty,” she said. He seemed disappointed but chose it anyway.

“In the Pacific Northwest it would be a piece of fish,” he said, after the waitress left, with an expression that suggested a burger was less than.

As a younger person, I might have appreciated that he was worldly enough to know where to find the freshest salmon sandwich (if not technically a burger). Maybe I would have engaged in a spirited repartee about where to find the best this-or-that. But the more I try to focus on this moment, the less I’m interested in conversations that encourage time travel. I’d rather not resuscitate a repast from the past, only to have it leave me longing. So far, I haven’t figured out how to simultaneously experience longing and gratitude. To fill up with gratitude I need to empty my mind.

“But we’re not in the Pacific Northwest,” I said, mostly to him and partly to remind myself to not take his cue to revisit Seattle where I went gaga over some succulent and soul satisfying salmon belly, the likes of which I might not encounter again.

Indeed, we were at least 1,300 miles from Salmonlandia, lucky to be in a town with more than one decent dining option. His comment left me feeling sad that his mind had been elsewhere and disappointed that he’d condemned the lunch to less than before the food had even arrived. As it turned out, I thoroughly enjoyed one of the most flavorful and tender salmon burgers I’ve ever had. For the sake of my future dining pleasure, it’s probably best that I forget all about it so that I can meet each subsequent salmon burger on its own merits, with curiosity rather than comparison.