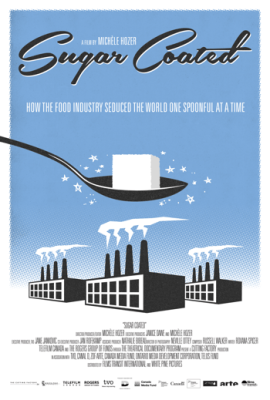 You know Doublemint gum? Here’s my “Double Disclaimer”: I’m biased, both against the prevalence of sugar in the food landscape and towards Cristin Kearns, my friend who’s featured in the Canadian film “Sugar Coated” (2016 winner of the Donald Britain award for best social/political documentary). Therefore, you might chew on the following with a grain of salt, a pinch of paprika or a dash of bitters. Ideally you’ll see the film for yourself.

I met Cristin at a writing workshop when we both lived in Denver, CO. She trained and practiced as a dentist and worked in an under served community. Her patients had severe problems, including rampant tooth decay and bone loss. Wanting to make more of a difference, she attended a conference on gum disease and diabetes, where the keynote speaker handed out a book called the “Fast Food Guide to Nutrition”. After noticing he’d given the green light to sweetened tea, she called him on it. He said there was no evidence linking sugar to chronic disease. Suspecting the dietary advice had been politically influenced, on her own dime she began to investigate, starting with her local library. She found documents from the Great Western Sugar Company and the Sugar Association, among other sources. These papers revealed that executives tried to minimize the dangers of sugar consumption. That the documents had been hiding in plain sight is astonishing and speaks to the arrogance of the industry, whose executives won the Silver Anvil award (as Cristin says in the film, it’s the Oscar for the public relations community), for convincing the public about sugar’s safety. Perhaps these self-congratulatory sugar barons figured that history would judge them kindly and felt no need to shred the evidence.

When Cristin shared her discoveries with me in real time, I felt outraged. How was it possible that, just as cigarette companies had manipulated the truth about the dangers of nicotine for decades, the sugar industry had persuaded American regulators to swallow the myth that sugar was not only harmless but part of a balanced diet? To the director’s credit, passion is present but outrage is absent from this film. Michèle Hozer’s emotionally well-balanced approach, interspersing interviews with experts speaking in measured tones, scenes of a Japanese health workers measuring waistlines to enforce that country’s “Metabo Law”, and mouthwatering footage and vintage advertisements for cakes, gooey chocolates and other confections, allows one to digest the devastating information without having their blood boil to sugar’s melting point. Even the funky Nutcracker soundtrack is sweet rather than dramatic. As Mary Poppins said, a spoonful of sugar helps the medicine go down.

I watched the film mainly to see my friend on screen and “meet” her mentor, Professor Stan Glantz, a leading tobacco control activist, and other folks she’s mentioned over the course of her journey. Her solo sugar sleuthing led to an exposé she co-authored with Gary Taubes for Mother Jones and to her current position as a postdoctoral scholar at the UCSF School of Medicine. The documentary crew, already on the sugar trail before she left Denver, filmed Cristin as she packed to move to the Bay Area and as she drove away. Despite already being familiar with some of the ingredients of the film, I was surprised that my disgust at the sugar industry’s deceitful business practices had not dissipated all that much. As someone with a sugar addiction, I occasionally resent that my struggle to remain divorced from sweets without periodic flings is complicated by the sheer prevalence, if not dominance, of sugar on the menu of modern life. That the dominance is buttressed by government subsidies, toxic and deceitful business practices and buoyed by relentless marketing makes me want to toss my (sugar free) cookies.

For those who say, “Just don’t eat sugar”, that can be easier said than done. Sweets appear prominently in supermarkets convenience stores and other retailers year round, and are strategically placed near checkout lines. They occupy even more square footage before holidays. Those marketing cycles are now so extended there’s barely a gap between the end of one season (or reason) to buy cake and candy and the beginning of another. Eating with family and friends who serve traditional desserts is a challenge; it’s harder to refrain when a frosted cake or freshly baked brownie is so close it excites my salivary glands, not to mention watching others enjoy it. Ditto for celebrations; we’ve been conditioned to mark special occasions with treats, often the more the merrier. Love and affection are expressed through sugar, and at times are synonymous with it: can you imagine a wedding or a child’s birthday without a cake? Yet genuine, nurturing sweetness, often harder for people to access and offer than a six pack of cupcakes, has nothing to do with dessert. Possibly just as dangerous as the obvious culprits is sugar that’s invisible, in places you wouldn’t expect it to be and probably doesn’t need to be. It’s added to yogurt and energy bars. It appears in ketchup and other condiments and, as I just ruefully discovered, in some beef jerky. No wonder I wanted to keep eating it! Even naturally occurring sugar, in high concentrations, is not healthy. In the documentary, Yoni Freedhoff, MD, a Canadian obesity expert, shows how one package of “no sugar added” Del Monte fruit stripes contains more sugar than Twizzlers, the candy it’s meant to substitute. Consuming one glass of pure grape juice is, sugarly speaking, the same as drinking a quarter glass of maple syrup. If it didn’t make my skull buzz like a bee hive, I’d go for the syrup, no question.

Dr. Freedhoff also shares a disturbing scenario, that the treatment of chronic diseases, many of which are diet related, will likely cripple our health care systems, the cost of which will be born by us all. That thought depressed me so much I reached for a piece of extra dark, 85% cacao chocolate (just 3g sugar, not enough to trigger a craving). To those who might say, “Exercise and take responsibility,” the film introduces us to Sami Inkinen, an endurance athlete. Mr. Inkinen became pre-diabetic after following the recommended, high carbohydrate American diet for 15 or so years, despite rigorous training 10 hours a week. As his partner points out, exercise alone can’t “move the needle” on blood glucose levels if the diet isn’t right. He was lucky to have discovered his condition before it was too late. Millions of people are not.

As discussed by many experts in the movie, the battle against Big Sugar is not new. For decades, researchers such as Sheldon Reiser, PhD of the US Department of Agriculture and Judith Hallfrisch, PhD, of the National Institutes of Health, studied sugar’s effects on health, including links to heart disease and obesity; in the early 1970s, health and consumer groups demanded that the amount of sugar in breakfast cereals be limited or carry warning labels. But industry operatives spent a fortune convincing regulators that the evidence is “inconclusive”, allowing sugar laden products to thrive within this adroitly created gray area. According to Professor Glantz, “Where we are in the sugar debate is about where the tobacco debate was in the 1960s.” Even if the state of discourse is somewhat retrograde, the recent availability of the film on Netflix is timely. As dark money continues to infiltrate the American political system and as mainstream media increasingly relinquishes its role as impartial and disciplined reporter and investigator of events, we can all take a page from Cristin Kearns’ personal playbook. Pay attention, trust your experience and intuition, get answers and speak truth to power. Whether you do so sweetly or not is up to you.

Writer, Feldenkrais champion, Aikidoka and explorer of internal and external landscapes.
View all posts by ilona fried »
« When the Shoe Fits (a Man and is Vetoed by a Woman)
Awareness of Feldenkrais Through…Spelling?! »