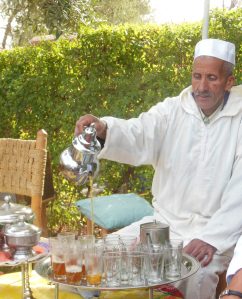 Moroccans share. They share tight spaces, such as cramped food stalls and narrow alleys. They share tea with visitors. To my initial shock, they even share taxis. To enter an occupied cab felt disconcerting but I quickly learned it’s faster and cheaper to ride in a car that already had a passenger, especially if they were a local. One day I hailed a taxi in Marrakesh and told the driver where I was headed. He gestured for me to get into the front seat, flummoxing if not mildly frightening an older British couple who sat in the back. They probably thought, much as I had when I first arrived, that the cab was all theirs. In Marrakesh, pretty much every taxi excursion turned into a variation of Uber Pool, when one chooses to pay less and travel out of one’s way to ride with another passenger.

These experiences still swirled within when I, craving the closest thing I could find to street food, walked to a hole-in-the-wall taqueria. I’d read that the Mexican eatery had limited seating so I planned to arrive after the rush. Still, when I got there, around 1:30pm, all the tables were occupied, just not fully. Several people waited to be seated and also stood in line for takeout orders. One man sat by himself at a table for two. Two Asian women, whose work IDs hung around their necks, sat at a table for four by the door, their coats draped around the other chairs. Given the amount of food on their plates, it seemed as if they were nearly done with their meal. Since I had less than an hour to eat and it didn’t look as if other tables would be free soon, I asked them if I could sit down. They said yes and told me I should notify the staff so they’d bring me a menu. So far, score one for Moroccan-style sharing.

Having been somewhat adventurous in Marrakesh and tasted sheep feet, I decided to try beef cheek tacos. After a waitress took my order, but before my food arrived, the two women paid for their lunch and left. That I suddenly sat alone at a table for four seemed odd. I didn’t want this popular spot to lose business so I gestured to two 20-something Hispanic men who stood waiting that they were welcome to sit down. They smiled and waved yet continued to do stuff on their phones. I wondered if they’d come over after the waitress cleared the plates and wiped the table. They did not. Meanwhile, two older white men showed up and looked around. I pointed to the seats next to me and told them they’d be welcome to sit down. They acknowledged me but left the restaurant to wait outside. Minutes later, I offered the other half of the table to yet another duo. Again, thanks but no thanks.

I didn’t take it personally, nor did I particularly want company. Had the table been split in the middle, with an inch between the two halves, I suspect at least one of the parties would have sat down because their space would have been more clearly defined. What a shame that in such a no-frills joint, which only recently began accepting credit cards and had posted a neon orange help wanted sign in Spanish, that the attitude wasn’t more congenial to helping the staff serve additional customers by agreeing to eat next to strangers. Moroccans displayed a generosity of spirit and willingness to accommodate others I had quickly grown to appreciate. When the two young Hispanic men got their own table not far from mine, nearly 15 minutes after I’d suggested they could sit near me, they again smiled and thanked me.

I laughed because, if I hadn’t gone to Morocco, I probably would have reacted much the way they did. I might have, upon arriving, looked at the crowded space and, rather than seeing possibility in a few empty chairs, decided to return another day instead of breaking the “rule” of giving everyone time to finish their meal. Still, a part of me wanted to cry. This tiny episode clarified for me, again, that local norms are not universally “normal”. Perhaps, in some ways, they are not even natural. The clash between my Moroccan mindset and the behavior of others reminded me of the time I returned from a long trip to Israel and Italy  I’d become accustomed to more direct displays of emotion and found New England behavior restrained to the point that I felt estranged.

Not long after I flew back, I caught a radio segment of someone talking about the “sharing economy” as if it were some shiny gadget rather than a way of life for many people around the world. This man did not mention the emotional benefits of spontaneous collaboration, cooperation and mutually beneficial exchange, or any spiritual notion about all of us being connected. “Sharing” has become a buzzword. Even AirBnB, started by a few guys looking for help with paying their rent, has floated the idea of becoming a publicly listed corporation. I wonder what that would look like: will investors demand that hosts decorate a certain way to boost, uh, shareholder returns?! My host in Lisbon, Portugal, where I had an overnight layover on the way back from Morocco, told me she receives e-mails from AirBnB urging her to lower her already reasonable rate to get more bookings. She, still believing herself to be a human who chooses to share her space and not a hotel seeking higher occupancy rates, has refused. Yet sharing occurs spontaneously in other parts of the world because, hey, it’s a homo sapiens thing to do. One doesn’t need always a well-capitalized third party such as AirBnB or Uber to share. One can ask to share a table at a crowded restaurant or a park bench. If we all did that from time to time, we might enrich ourselves in unexpected ways.

P.S. The beef cheek tacos were pretty good even though no one shared my table.

Join my e-mail list to receive all my articles. Thanks for supporting this blog! Donations of any amount gratefully received.

Writer, Feldenkrais champion, Aikidoka and explorer of internal and external landscapes.
View all posts by ilona fried »
« The Primal Power of Street Food
Want to #DeleteFacebook? The Feldenkrais Method Can Help »