Dispatch from Barcelona “Base Camp” 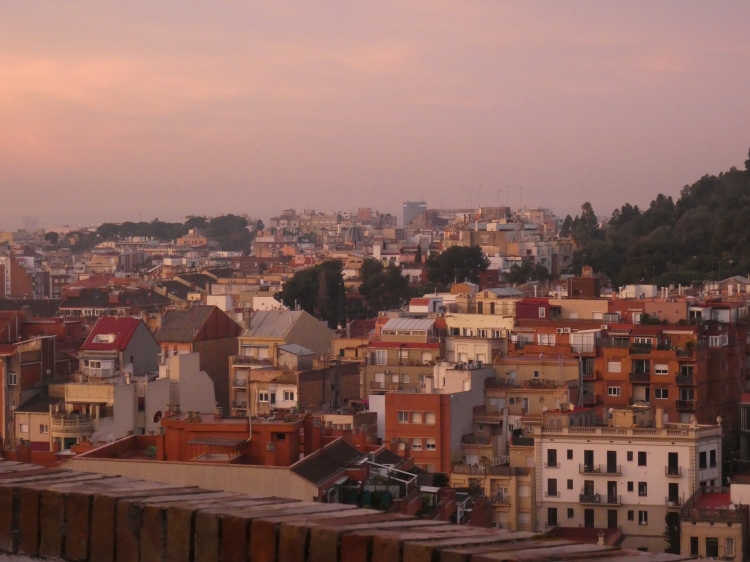 The films of Pedro Almodovar captivated me when I was younger, especially “Women on a Verge of a Nervous Breakdown”. The actresses he hired for that movie did not have traditional looks. One, whose name I can’t recall, had a slightly bent nose, a narrow face, and huge asymmetrical red lips. I remember being enthralled by the rat-a-tat Spanish as the characters got themselves into one improbable or avoidable situation after another, until the level of absurdity began to seem normal.

A week ago I landed in Barcelona. It’s a city I have wanted to visit for years, but each time the thought of going crossed my mind, something would happen to discourage me from making plans. When the idea first arose, I was living in Colorado. I had the notion of flying there a few months later, but my older brother told me he was going to give a talk in Boulder around that same time. Since I rarely saw him, it seemed strange to take off and not be there when he came, so I didn’t act on that impulse. Shortly after I left Colorado, I began looking for flights. It’s as if some strange, otherworldly force removed my hands from the keyboard and surrounded me with an invisible yet powerful field that prevented me from taking action. When I visited Budapest in 2017, I gave myself enough time to include a sojourn to Barcelona. But I got sick during that trip and decided not to push my luck. In September 2018 I booked a frequent flyer ticket here, came down with a bad cold, and cancelled. Within weeks, my right shoulder froze. I was in too much pain and under too much duress from the sudden loss of mobility to consider flying anywhere. In devoting all my energy to healing and rehabilitation, I wondered if I would ever get here, or if it would remain a fuzzy fantasy, permanently out of reach. I knew that the only way to outwit the forces of resistance that seemed to arise whenever I even thought of Barcelona was to go quietly, without fuss, much planning or announcement, as if it were no big deal.

While my shoulder is not healed, the pain had subsided enough. I refused to let my daily pool rehabilitation exercises become an obstacle. Not this time! I booked a ticket with frequent flyer miles. A few days later, my right eye started to swell, a sign of elevated stress. I wondered: would my eye keep me from going? As the swelling subsided, I looked into lodging. I had a few non-negotiable requirements: to be within walking distance of a pool and have enough space to stretch out in the room I rented. I found rooms on AirBnB in two different apartments, both within a 15 minute walk of a beautiful pool. The nicer one, with funky decor and matching linens, barely had room for the furniture. The other choice, outfitted with an almost rustic bed, a small table and two chairs, had ample floor space and an adjacent, private terrace with fine views. Previous visitors ranked the hostess high for her hospitality and warmth. A resident cat and dog added to the appeal. Having had some bizarre AirBnB experiences in the past, I read the listing carefully. I noticed there was no WiFi. I e-mailed the hostess in Spanish to ask whether there were WiFi cafes nearby. Yes, she wrote. Good enough for me. I also noticed that the listing said the room did not have heat. I imagined that if it were impossibly cold, she would not be renting out a room. I booked it for the first part of my stay. Then I took off.

Walking from the Barcelona metro to the apartment felt like climbing a small mountain, even though an outdoor escalator ferried me and my bags partway up the steep hillside. At the apartment building, I squeezed into an elevator so tiny I felt I had to hold my breath as it ferried me to the top. My hostess greeted me at the door and showed me the room. We stepped onto the terrace, whose view was indeed magnificent. She explained that she and her daughter had recently moved to another apartment but were honoring their AirBnB bookings through early April. That meant no dog, no cat, no other people. My jet-lagged brain spun as it adjusted to this information. She pointed to two thick blankets in case I became cold.

“An Australian couple was just here and they had no problem,” she said. I looked at her closely to see if she was telling the truth. “They had just gotten married.”

No wonder! She showed me around the apartment. In the tiny kitchen, I saw a white rectangular appliance and asked if it was the refrigerator.

“No, the movers took the refrigerator yesterday,” she said rapidly. “They were supposed to take the dishwasher but they made a mistake.”

I didn’t believe her. Of course she had them move her refrigerator, an expensive item.

“No refrigerator?” I said. I had hoped to shop and do some cooking. I had seen a microwave pictured in the listing, but at that point I knew that it, too had moved. I had planned to use it to heat a compress for my shoulder.

“Well, don’t worry, since there is no heat the food won’t go bad,” she said.

I realized I could be the annoyed traveler who wants everything to be as advertised, as if things going as planned is somehow a badge of honor and that accepting a situation that is not as expected is equivalent to being a sucker. Except the annoyed person did not have the energy or the mental bandwidth to turn around, leave and find different accommodations. Then some ancient voice, upholding some outdated and irrelevant standard of propriety, reprimanded me because “women my age” don’t stay in places like this, and shouldn’t I be ashamed?

At that moment I knew I needed to banish all killjoy influences that lingered in my psyche. To keep my spirits afloat, I decided to drop any misery-making worldview, release myself from the shackles of expectations and others’ opinions and become someone else entirely. Why the hell not? That is the beauty of traveling solo: one can endlessly reinvent oneself with no one around to demand consistency.

A quiet voice dropped in: “Pretend you’re in a Pedro Almodovar film!”

There was nothing else to do but agree with her logic that, in fact, I did not need a refrigerator. The temperature would magically stay within a range to preserve the food while keeping me from shivering.

I had already fallen in love with view from the terrace and knew I’d enjoy watching the sunset each night. I looked forward to walking through Park Güell, home to Gaudi’s amazing work, on my way to and from the pool each day. And, I would have the place – completely devoid of charm and stripped of most furniture and basic appliances – to myself. That was worth something in a city with space at a premium.

Later that afternoon, I noticed that a few bulbs were not working in the bathroom. Since dead bulbs are one of my pet peeves. I decided to see if the bulbs were loose. Might a gentle twist restore light? Alas! A bulb exploded, raining glass shards onto the floor. The entire apartment, not just the bathroom, went dark.

Afraid the situation might get even more absurd, I did not want to flip the switch in the fuse box without the owner’s guidance. I left her a voice mail. An hour later, I went to an Internet cafe to contact her through AirBnB, to document the situation just in case. I returned to the apartment and strapped on my headlamp, my must-have travel accessory. As the sun went down and a chill entered my bones, I reminded myself that I had gone “glamping” (luxury camping) once before.

Couldn’t I pretend to be outdoors while indoors?

Eventually the hostess and I spoke. She told me how to reset the fuse box (success!). Exhausted, I changed into my pajamas and dove under the covers. By morning, the cold had vanished. I decided that I would not let a few defunct bulbs consume any more life force. As I prepared a bowl of oatmeal, I heard the buzzer ring and the door open.

“Is someone here?” I asked, without my usual apprehension around unexpected visitors.

“Oh, her daughter,” I said. A dog’s toenails click-clacked as they walked down the hall to the kitchen. Since I was still in a Pedro Almodovar film, I took it as perfectly normal that she leaned in for the double kiss. She asked if she could charge her phone while she ran to the store to get bulbs.

“Sure,” I said. I had wanted to make my maiden voyage to the pool but decided to stick around to see how this scene would unfold.

“Wow, you eat healthy,” she said, pointing to my oatmeal and grapefruit. I told her I changed my diet to help my shoulder heal.

“That must be hard…you have to plan what to eat,” she said. I got the feeling that planning was not her forte. It wasn’t mine, either, and that is why we were co-starring in this movie.

“Do you need anything else?” she asked.

“How about a small pot to boil water?” I asked. Her mother had left a few plates, a handful of utensils, one large pot, a sauté pan and some olive oil. The oven didn’t work. The gas stove didn’t light automatically. The electric water purifier had experienced cardiac arrest during the bulb explosion and couldn’t be revived.

She left the dog, a pudgy, wheezing King Charles spaniel, upstairs. When she returned, she replaced one of the bulbs. The other socket had residue from the explosion. She tried cleaning it but I told her not to bother. At that point, I didn’t care. I decided that this place was my basecamp, an adventure hub. As mountaineering basecamps go, it was quite luxurious with hot water, a working toilet and a gas stove. Smack in the middle of a hill, I had to ascend or descend a steep staircase whenever I wanted to go anywhere. My hiking muscle memory quickly returned. Every time I carried a 5-liter jug of filtered water up the hill or lit the burner with a match I reminded myself I was tending camp, one that offered tranquility and a view of the sky that filled me with joy. Just as a camper would open the tent flap each morning to greet the world, I raised the metal shutter that covered the sliding glass doors to let the Spanish sun in.

Downhill, I found Wifi at a modern local library (with cafe and outdoor seating) that serves as a community space. Uphill, when I walk to the pool, musics wafts through the air as performers serenade the parade of global tourists. Parrots squawk and flutter among the the palm trees in the park. The health club is top notch, the people friendly. At night, there are about two hours of chilliness before I go to sleep. My food, even cheese and smoked fish, has not spoiled. It turns out I didn’t need heat or a refrigerator to feel happy.

Writer, Feldenkrais champion, Aikidoka and explorer of internal and external landscapes.
View all posts by ilona fried »
« Can I Find My Own Rhythm in Uber’s Algorithm?
Barcelona, the StairMaster of My Dreams »

4 thoughts on “Dispatch from Barcelona “Base Camp””