Barcelona, the StairMaster of My Dreams 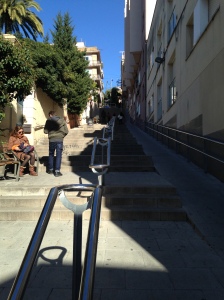 Barcelona feels as if it’s at least three cities combined into one. The steep hills with rolling streets and views to the sparking Mediterranean remind me of San Francisco. The downtown with its wide boulevards, plazas and ornate architecture echoes Budapest. The beachfront area’s gleaming hotels and contemporary buildings hint of Miami.

I began my stay in the hilly section, and each day faced a steep flight of steps when I wanted to walk to the swimming pool. Staring at those stairs reminded me of how I felt each time I went hiking in Colorado, when the ascent felt impossible at the beginning. There is something daunting and humbling about standing at the base of a mountain where the path rises sharply and unrelentingly, without a reprieve in sight. Many times during my hiking days a voice in my head would tell me I wouldn’t be able to get to the top, even though I had proven to myself, again and again, that I could. Each mountain excursion became an opportunity to face down my demons, who’d evaporate by the time I reached the peak. In recalling those experiences early in the trip, I knew I just needed to put one foot in front of the other and begin climbing the steps, one at a time, without making a fuss about starting the day by walking uphill. 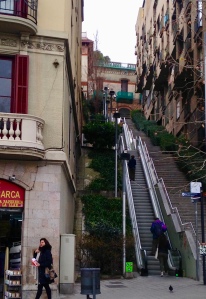 Because there are so many steps, it’s not practical to rush or run. That would quickly wear out the average person. The prevalence of staircases and steep streets forces one to keep a steady pace and stay present. To entertain myself and engage different muscles, I often ascend wider staircases at an angle or via zig zag. On one particularly sharp slope near my first rental, I walked backwards, especially when carrying heavy groceries, to better balance myself, a trick I learned while walking El Camino de Santiago. Sometimes putting one foot directly in front of the other is neither fun, feasible or effective. Every so often an outdoor escalator (upwards only) offers a reprieve. Many staircases have flat areas with benches where people can rest, smoke, snack or socialize, and ramps on the side to make it easier to push a stroller or wheel a cart. Some sections of streets, which are steep but lack steps, have hand rails. That human needs have been taken into account makes stair climbing less onerous.

The more I climbed the steps, both up and down, the better I felt. The prize for walking uphill is increasingly better views. Going downhill offers a sense of ease and exhilaration. The fresh air and bright sun are salutary. On the days I take public transit or spend time in the flatter sections of town, I miss the stimulation of the steps and the mental focus they require. Barcelona is probably the only StairMaster I will ever love.

Writer, Feldenkrais champion, Aikidoka and explorer of internal and external landscapes.
View all posts by ilona fried »
« Dispatch from Barcelona “Base Camp”
When an Introvert Walks into a Bar…Learning How to Act Like a Local in Spain »