I am a Bostonian 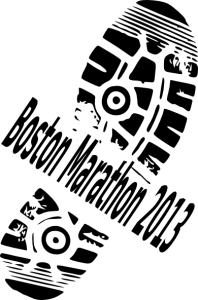 If one believes that birth city determines identity, then I am a Bostonian.

The Boston Marathon seems to have always had a large local footprint.  Even in suburbs far from the start or the finish line, runners and joggers were as common as spring crocuses.  In the hilly Lexington neighborhood where I grew up decades ago, a few intrepid souls even ran in winter along ice-caked asphalt, mouths and nostrils belching fog.  Boston seemed to be the center of the running shoe universe, home to one of New Balance’s factories. Participating in the marathon was equally a rite of passage and a test of endurance. My older brother ran it once, as did many other classmates and acquaintances over the years. That particular activity never called me, but I understood its difficulty and its appeal. To be able to say that one had completed the marathon was itself huge, a badge of athletic honor and local pride, even if completing the grueling course took all day.

While I never waited for anyone at the finish line, one year I did hang out in Wellesley, still a ways from the end, to photograph marathoners.  While the grim and gritty expressions spoke volumes, so did the costumes, smiles and goofy hats that many participants wore.  They weren’t running to win or even to place, they were running to celebrate and honor either a loved one, the camaraderie of their running club or to raise money for a cause. Up close, the marathon was far more than just a race; it was a sweaty, gasping and stumbling river of humanity who risked injury in service of others, cheered on by miles upon miles of enthusiastic well-wishers.

Despite having spent a good chunk of my life around Boston, the place never grew on me. Nor did I feel identified with it, despite the words on my birth certificate. Even though I learned to navigate along its many curvy, confusing, potholed and poorly marked rotary-filled roads, I didn’t want the dubious distinction of being a Boston driver. The winters, long stretches of bone-chilling grey, and the summers, sopping with humidity, oppressed my sensitive biochemistry. The culture of reticence and reserve didn’t suit me, nor did I consider myself a member of the Red Sox Nation. Several years ago, in search of sunshine and serenity, I moved to Denver, Colorado.

I was in Boulder yesterday when, between activities, I opened Facebook and learned of the marathon bombings. I had forgotten that in Massachusetts it was Patriots’ Day, when, as a child, I’d sometimes rise before dawn to watch a reenactment of the Minutemen confronting the British Red Coats in the center of town.  Later there were pancakes, then a parade. A day off from school, a chance to play with friends. That someone, or a group of someones, chose to wreak havoc on these celebrations is sickening. The number of dead and injured horrifying and heartbreaking. That my family lives near Boston, some even along the marathon route, where police cleared a suspicious object not far from my older brother’s house, made the news all the more sobering. Yesterday, thousands of miles a way, I finally felt like a Bostonian.