Of Feldenkrais and Failure 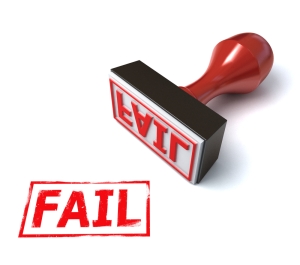 What does failure mean, and according to whose definition?

In order to change our mode of action we must change the image of ourselves that we carry within us. – Moshe Feldenkrais

At times I have gone to great lengths to avoid failure, running from it as fast as prey escaping a predator. As a younger person, I believed failure was not acceptable, a stain on my name. I held my breath, clenched or gritted my teeth, hyper focused, double or triple checked things or otherwise stressed myself out the wazoo to succeed or, at least, not fail and certainly not be criticized. I studied hard and pushed myself and tried to “fake it until I made it”, all in the service of avoiding crushing disappointment, the sting of rejection and the searing heat of humiliation. That my self-image excluded failure didn’t mean that I always succeeded. It just meant that I limited my emotional palette to a few carefully chosen colors.

As I’ve written earlier, one of the reasons I enrolled in a Feldenkrais training program was to modify that self-image so as to participate differently in life, to stay in the process rather than focus on a specific outcome, to include sensing as part of my experience and not run roughshod over myself in pursuit of goals or to look good. If each moment is of a high quality and I’m present for both the pleasurable and the painful, does it matter so much where they lead? If I do my best in any given situation, without trying to constantly fulfill a high standard, can I feel satisfied with whatever results?

In that spirit, I came up with a series of offerings for Feldenkrais practitioners designed to transform marketing, which for some reeks of hard selling or has otherwise unpleasant connotations, into a more qualitative experience, devoid of hype, PowerPoint or bullet points. In a burst of creativity, I drafted some “lessons” that mimicked the titles and format of Awareness Through Movement classes, hoping to bring some humor and familiarity to the subject. A practitioner in Australia suggested I offer a conference call and walk people through it. Since Feldenkrais is about learning, I took his idea as an opportunity to develop a new skill, starting small and without allowing perfectionism to hijack the experience by insisting that I get it “exactly right” the first time.

I researched conference options, looking for a free service that would allow people to dial in as a local call from their own country. After looking at a few, each of which had either a constraint or complexity that didn’t appeal, I chose freeconferencecall.com. I was familiar with it from other people’s calls, and my Australian friend agreed to test it with me. Each of our dial in numbers worked. He stayed on the line while I familiarized myself with hosting basics. Satisfied, I created and shared a sign up form, indicating that this event was a “first approximation”, a work in progress. Again, to start small and not overwhelm myself, I limited the call to 10 people. It filled quickly. I planned a second one. The day before the call, I sent a reminder to folks with instructions for how to participate; that I had interest from Canada, Italy, the US and the Land Down Under delighted me.

The day of the conference, snow descended from a milky sky, obliterating the horizon and my sense of spaciousness. Anxiety churned in my chest and belly as I pondered how I’d come across and if people would find my approach valuable. I also wondered, since it was a free offering, if everyone would show up. Sometimes people express intentions but don’t follow through; I hoped that wouldn’t be so but I prepared myself for no-shows. A few minutes before the appointed time, I dialed in as the host. I waited. And waited. The line was as silent as the thick flakes blanketing my neighborhood. I tuned into my pounding pulse. Minutes passed. I wondered what was going on. I pressed *2, which indicates callers on the line. Were people there, but I couldn’t hear them? The automated voice said I was the only one there.

The snow, indifferent to my disbelief, frustration, and mortification, kept quietly falling. I hung up and redialed. Again, I was alone. Eventually I received a text from a Californian on the call. She said they were waiting. Wherever they were waiting was not where I was waiting. They were in a virtual cafe, having a chat and perhaps coffee without me. I hoped they were in good humor. At this point, nearly 30 minutes had passed; I called again, this time using the participant access code, expecting I’d end up with them. Nope. I called tech support, which put me on hold. I texted the woman to let her know I’d reschedule, since I had no idea what the problem was or how to fix it.

The conferencing service, which I contacted later, didn’t know either. The support staff explained that if people dial the access code quickly, they might land in the wrong room. Yet, the callers were together; had they each dialed the access code incorrectly in exactly the same way? Hmm. I asked support if they could search the California phone number, to identify where it had been routed. They couldn’t find it. Apparently, she and the others had entered teleconferencing’s Bermuda Triangle.

One of Moshe Feldenkrais’ widely quoted statements is that his method makes “the impossible possible, the possible easy, and the easy elegant.” Alas, a techno-gremlin made the possible impossible, what could have been easy effortful, and what might have been elegant egregious. While the call did not succeed as planned, and I was deeply disappointed, it was not the unmitigated failure that my earlier self-image would have declared it to be. As I discovered afterwards, two participants had messaged me on Facebook to make sure I was OK and reassure me of the goodwill amongst the group. After sharing plans to reschedule a second approximation (with a different service), I received many appreciative and sympathetic responses. In the end, I felt more embraced than embarrassed. Perhaps the distinction between “not an instant success” and “failure” is one I needed to learn, again, in yet another Feldenkrais lesson delivered off the mat.

Writer, Feldenkrais champion, Aikidoka and explorer of internal and external landscapes.
View all posts by ilona fried »
« Feldenkrais: When Irritation Is Injury
Feldenkrais in ‘The Brain’s Way of Healing’ »

10 thoughts on “Of Feldenkrais and Failure”