Feldenkrais: Cartography of the Self 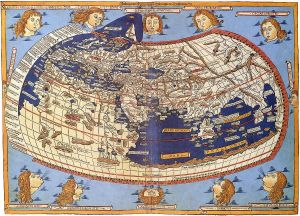 The map that is the unfolding self is not exactly leading anywhere. The arrow that says YOU ARE HERE is your first coordinate. – Jeanette Winterson

I love maps, the paper kind that you can hold in your hand, that fold and unfold, revealing the layout of a place and how neighborhoods connect. Despite many declutterings, I’ve kept most of the maps of foreign cities I’ve visited, whose streets I’ve walked and wandered, whose shop windows I’ve peered into, whose cafes have offered respite during long days of exploring. While I may no longer remember the particulars of each trip, I can recall the excitement and joy of setting foot in an unfamiliar place, where each block and stretch of pavement offers the promise of novelty and sensory stimulation.

In the current segment of my Feldenkrais training, we’ve been spending some time “mapping the feet”. I perked up at this phrase and wondered if I could transfer my appreciation for and curiosity about maps to mine and even other people’s feet (a year ago, the thought of touching another’s foot didn’t excite me, to put it mildly). To “map” in Feldenkrais means to use directed touch to inform a person about their anatomy, to show them, non-verbally, the roads, byways and subdivisions of their feet so that they can get acquainted with how it’s arranged and all the directions available for movement. The feet, despite carrying us dutifully day after day, are often taken for granted, ignored or even abused until they start to hurt or create pain elsewhere in the body.

In introducing this mapping exercise, trainer Julie Casson Rubin invited us to look at Frank Netter’s Atlas of Human Anatomy, whose beautifully rendered drawings reminded me of carefully shaded topographical maps and captivated even this  “osteophobe” (I’ve never been enamored of skeletons). She asked us to map the “landmarks” of the foot, such as the heel, much as we would identify a point of interest on a map, to trace the bones of the foot and spend time with each digit, as well as to gently “fold” the edges of the feet in and out while a person lay on their front.

The foot has 26 bones, some of which have names that are as exotic as foreign lands. The three cuneiform bones, nestled behind the five metatarsal bones (which lead to the toes), evoke an ancient manner of writing developed by the Sumerians that consisted of wedge shaped marks on clay tablets. The cuneiform trio are wedged against the navicular bone, so named because it resembles a small boat. The many bones in our five familiar toes are more fancily referred to as “phalanges“, the plural of phalanx, which calls forth rows of sandaled soldiers armed with spears. Who knew that the foot was a hotbed of rich imagery?

Mapping another person’s foot is, I’ve discovered, surprisingly meditative. The foot is fleshy; to press it in particular places, with intention, is perhaps similar to how the Sumerians worked with clay to create their pictographs, which conveyed information to the brains of others. Since we can’t always feel those internal bones, particularly the deeply tucked cuneiforms, through skin and muscle, focus is required to communicate, through touch and directed attention alone, the structure or map of the foot to the person’s brain. When the client later rises from the table or floor, they might sense a difference in how they stand and move, which could redraw the map of their self image. Perhaps they feel more steady on their feet for the first time, or for the first time in a long time.

People who are vaguely familiar with the Feldenkrais Method might lump it into the generic category of “body work”, but it can be considered cartography of the self. By communicating spatial information about the body effectively to a student, a Feldenkrais practitioner helps that person outline and then fill in who they really are. Just as maps of the globe have been redrawn as more precise measuring devices are developed and new information is discovered, the Feldenkrais Method offers tools to help people continue to travel internally and explore their contours, shapes and connections, perhaps with the same fresh curiosity that is available when walking in a foreign city, allowing them to refine and improve the maps of their unfolding selves as often as needed, even moment to moment. There is no formula to this process, no precise protocol to follow. But since the feet contact the ground and carry us, whether we know where we’re going or not, whether we’re carrying a paper map, a GPS or navigating by the stars, mapping the feet is a good place to start. It’s a way of creating that first coordinate, the arrow that says, “You are here”.

Writer, Feldenkrais champion, Aikidoka and explorer of internal and external landscapes.
View all posts by ilona fried »
« I Was Locked Out. Were Others Locked In?
When Adventure Beckons, Pause. Then, Buy a Toothbrush. »

6 thoughts on “Feldenkrais: Cartography of the Self”