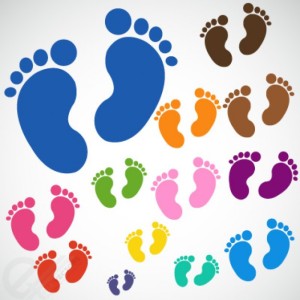 Not only babies play with their toes.

What does it really mean to stand on our own two feet?

Until I sustained an injury walking El Camino de Santiago, I hadn’t given much attention to my feet, except to lament their rather large size.  In our culture, we typically wrap our feet in shoes during autumn and winter and bare them, to various degrees, in spring and summer. Some women (and men) might treat themselves to a pedicure or occasional foot massage. For most people, that’s the extent of having positive regard for the feet (in our odor- and beauty-obsessed culture, it’s easy to see feet purely as stinky, ugly appendages). That feet are encased or enclosed much of the time limits their ability to sense and stretch; often, the four smaller toes act as a single unit, essentially glued together. For people who don’t spend much time in nature, where surfaces range from squishy to rocky and require different foot and ankle positions, walking primarily on pavement and manufactured floors curtails the range of possible movement. Someone unaccustomed to navigating uneven or differently textured surfaces might lose their footing more easily than a person who has given their feet more terrain to explore.

At the beginning of my Feldenkrais Training we practiced sucking. In a short time we’ve progressed to rolling around and playing more extensively with our toes (sometimes we do both!). Ideally and perhaps eventually, we will differentiate movement in each toe, just as we are able to do with our fingers. The trainer for this two week segment, the supremely gifted Aliza Stewart, had us interlace our toes to remind our brains that toes have the potential to be independent of each other. Prying them apart and inserting those of the other foot was as awkward as squeezing into too-tight pants. We also interlocked our fingers with our toes, alternatively placing the hands on the soles and tops of the feet, to create separation between the digits. Next we positioned the soles of our feet together and used a thumb to first separate our big toes from the smaller ones, which we grasped with our other hand. As Ms. Stewart led us through more combinations and permutations of toe grabbing, she recounted what Moshe Feldenkrais had to say about the feet:

“If one toe doesn’t function, we are missing part of our personality.”

When a person is considered holistically, rather than as a collection of discrete parts, it makes sense that if something is not working well, even a single toe, it will affect the rest of the system. By that measure, I had been missing a large chunk of my personality until last fall, when I finally differentiated my left pinky toe from its neighbor. When my injury (tendonitis) was at its most severe, I couldn’t walk very far without pain, and being on my feet for long periods also created intense discomfort. That I literally could not stand on my feet, let alone do much aerobic exercise, precipitated periods of despair. It was as if my spirit hobbled on crutches, sabotaging efforts to stand on my own two feet in less literal ways.

How will directing attention to my feet, to facilitate the movement of all my toes, restore more of my personality?

It sounds a bit far fetched, it not magical. But that is the beauty of practicing awareness: regardless of where and how one starts, awareness expands. Spending time becoming more intimate with how my toes connect to, and interact with, the rest of me, will probably facilitate getting to know my whole self better. Greater awareness of how I move will generate more awareness of how I operate, generally, and of which parts of myself, like my toes, I’ve either neglected, covered or deodorized, reluctant to show the world. To stand on our two feet, then, means to exclude nothing, not even the tiniest or stinkiest of toes or aspects of ourself we’ve wished to hide.

Writer, Feldenkrais champion, Aikidoka and explorer of internal and external landscapes.
View all posts by ilona fried »
« Feldenkrais: Roll Your Eyes, Change Your World
Feld-Zen-Krais: Doing and Not Doing »