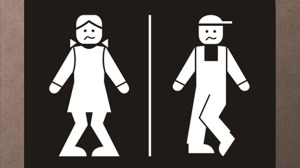 Again, I’m reminded that writing can be an uncannily mystical act. Shortly after drafting my latest post, some of my words came true. In that post, I wrote:

“To have an answer, or at least appear smart, had been a survival strategy. To be caught without knowing something was practically as humiliating as being caught with my pants down.”

The next day I drove a rental car from San Francisco to Point Reyes National Seashore, an antidote to the bustle of the city and one of my favorite places to visit. Along the way I stopped at Muir Beach Overlook and took a short walk along a dirt trail with coastal views. Returning to the parking lot I went to use the rest room, housed in a small wooden structure with two unisex bathrooms side by side, each behind a metal door. I heard someone in the one on the right, so I walked around to the left side. Hearing nothing, I pulled the door and it opened on a woman who, at that moment, was dressed and standing. I apologized and closed the door. Then, the other one became vacant and I went inside. Its lock didn’t work properly, so I lowered the door stop to see if that would help. I tried pushing the door open with the stop in place and it didn’t budge very much; only someone using more than the average amount of force would be able to open it. While I have no problem heeding mother nature’s call in the woods, on a mountain side, or along El Camino de Santiago, even with the risk of being spotted by another adventurer, it’s another thing to have my potty privacy violated in civilization. That scenario is literally the stuff of nightmares.

Satisfied that I had secured the door, I pulled down my pants and sat on the seat. Midway through doing my business, with a large expanse of thigh and buttock exposed, someone opened the door, door stopper notwithstanding. This strong person, a tall middle aged Asian man, looked at me. I looked at him. We froze, as if we were both deer and headlights simultaneously.

“Could you close the door?” I said, glued to the seat, not wishing to get up and display even more of myself.

He tried, but the damn door stopper stuck to the pavement, leaving the door far more open than closed. He tried again and left. I am not sure who was more embarrassed.

Knock kneed, I hopped towards the corner of the rest room closest to the open door, scooched up my pants, and after a tedious eternity managed to pry the stopper from the ground and closed the door. It was a rare moment that I, an introvert who often enjoys exploring by myself, wished I’d had a companion who could have kept an eye out for me. But, remembering what I had written the night before, I had to laugh, at least a little, at the timing of this unfortunate event. Had I unwittingly invited this episode to prove to myself that getting caught with my pants down was not life threatening or permanently mortifying? Perhaps God, or The Universe, had a hand in orchestrating this adventure, dropping a huge hint that excessive attempts to protect myself could backfire. Could I be a tad less vigilant? Or was the message, once again, that writing is powerful? If so, what did I want to be putting out there?

Later that day, after strolling along Drake’s Beach at Point Reyes, I walked into the small visitor’s center to ask about something I’d observed along the seashore. The ranger behind the counter didn’t remember the answer, even though she was familiar with the question. She didn’t make a big deal of it, but called the main visitor’s center and put me on the phone with someone who could respond. Then, I repeated the information to the ranger, who wrote it down for future reference. She didn’t seem humiliated in the least.