Moshe Feldenkrais was born on May 6, 1904. To celebrate his extraordinary life, I’ve collected the “greatest hits” from the essays and articles I’ve written about him or the Feldenkrais Method of Somatic Education. My selection criteria? A combination of personal fondness, the popularity of the piece, and the emphasis of the article. Dig in, enjoy and imagine it’s birthday cake!

Finding Feldenkrais, or Maybe It Found Me

I didn’t love or even like my first Feldenkrais Awareness Through Movement class. In fact, it drove me bananas. It’s a good thing I stayed until the end because, after rising from the floor, I felt amazing. That’s when I began wondering why I hadn’t heard about the Feldenkrais Method before. This post became the first of an ongoing series to both explain this modality to others and deepen my understanding of it. 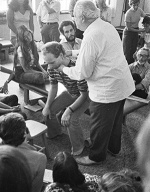 Why I Do Feldenkrais Instead of Yoga

When I published this piece in early 2015 on Elephant Journal, the article went viral and generated controversy and compliments. Many readers shared that once they began exploring the Feldenkrais Method, they no longer found yoga as compelling or relevant. Since I was living in a yoga-saturated city at the time, I appreciated learning that my experience of “breaking up with yoga” after practicing it for a decade had been far from unique.

Feld-Zen-Krais: Doing and Not Doing

Growing up in a competitive environment and culture, I learned to associate speed or intense effort with achievement and to compare myself to others or external benchmarks. Yet, doing things fast or focusing on a goal to the exclusion of the process doesn’t necessarily lead to a satisfying, meaningful or good result. Trying to measure oneself against society’s standards or the accomplishments of peers is a foolproof recipe for dissatisfaction if not misery. Feldenkrais lessons decouple movements from goals and achievement and invite us to do a movement without habitual “doing”, or pushing to our limit. This process allows us to sense ourselves, learn at our own pace and make unexpected discoveries.

While lying on the floor during my training, this analogy occurred to me. People who taste wine inhale the bouquet, take small sips, and compare a limited set of wines to make distinctions. Drinking too much or too quickly would dull the palate and defeat the purpose. Ditto for Feldenkrais lessons: slow, deliberate movements allow the nervous system to make subtle comparisons and serve up movement that feels easier…and delicious! 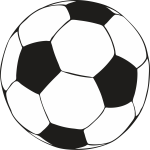 Watching Soccer Through a Feldenkrais Frame

Moshe Feldenkrais had been an avid soccer player until severely injuring his knee in one game (later, he injured his other knee). His method arose out of his attempts to regain pain-free mobility without surgery. I thought of him, his work and his teachings while watching one of my nieces compete in a soccer tournament. One of the things Dr. Feldenkrais said while teaching in Amherst bears repeating in a results-oriented society: If I think of achievement principally, I find that some part of myself is always left out. It’s a good reminder to not stake our worth or happiness on winning.

While living under the British Mandate in what was then called Palestine, Moshe Feldenkrais had to learn how to defend himself against knife attacks. Prohibited from carrying weapons, Jews relied on their wits and bare hands to save their lives. Eventually Moshe Feldenkrais moved to France where, among other things, he studied Judo, earned a black belt and became an expert. Martial arts principles, such as being able to easily reverse one’s movement, are subtly woven into his method. As for the title of this essay: while most of us are not regularly threatened by knife-wielding crazies, we might be approached by people with crazy ideas that appeal to our hearts but might not seem practical. How do we respond to those?

Felden-questing (or, Adventures in Functional Integration)

It’s not always easy to explain what takes place in a one-on-one session with a Feldenkrais practitioner. Much of the communication can be non-verbal, and the practitioner may not always work directly with the area of concern, which can feel perplexing to someone used to direct interventions in massage or physical therapy. This article is one example of a highly participatory lesson with dialogue to help me (and maybe you!) understand what was happening.

How Moshe Feldenkrais Reminds Me That Life is An Adventure

Moshe Feldenkrais developed more than a thousand movement lessons, each of which has its intricacies and opportunities for learning and surprise. Yet, the overarching lesson he taught by finding ways to thrive during cataclysmic times is that life itself is an adventure. Click here for the video inspired by this article.

Roll Your Eyes, Change Your Life

One of the most fascinating and surprising things I discovered through the Feldenkrais Method is how moving the eyes in slow, unfamiliar ways can quickly and radically change how I experience being in my body and even how I perceive the world. We tend to ignore our eyes unless they are not working well or are in pain, but if we are willing to attend to our eyes we can both improve our vision and sense of well being.

What’s Missing from the NYT Feldenkrais Article? The Elusive Obvious 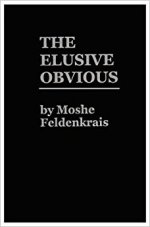 Interested in trying Feldenkrais at home? I’ve helped create the text for the Movement and Creativity Library, with 150+ lessons. Subscriptions are monthly. You can also support this blog, a labor of love! Join my e-mail list or contribute

Writer, Feldenkrais champion, Aikidoka and explorer of internal and external landscapes.
View all posts by ilona fried »
« Want to #DeleteFacebook? The Feldenkrais Method Can Help
Anthony Bourdain, Food and the Soul »