Jerusalem from the Inside of a Pool 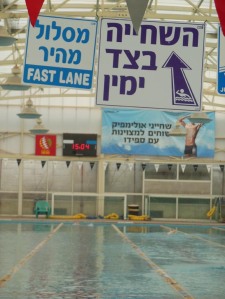 A sign tells swimmers to keep to the right. But just like in the city, pool traffic can get dicey.

My Zen teacher likes to say, “How we do anything is how we do everything.”

If the same can be said of a society, would the workings of a single pool reflect the culture at large?  Last week I loosely considered this question while swimming almost every day at the Jerusalem Pool (it was closed the first day of Passover).  That the city’s only Olympic sized pool was a brief walk from the apartment some of my family had rented was nothing short of miraculous.  I both needed the exercise and regular downtime from group activities.

My gratitude for the pool’s proximity deflated upon my first visit.  At the entrance, tucked inside a shopping center, a gruff security guard asked me in Hebrew if I had a membership.

“No,” I said, in Hebrew, adding, “I don’t understand Hebrew well.”  I switched to English.  “Can I buy a ticket to swim?”  He shooed me into a dingy office where a dark haired man sat behind a desk.

“55 shekels,” said the man.  That was about $15, the equivalent of 2.5 full price admissions to my Denver pool.  I asked him if I could buy a pass; he showed me a card that offered 11 visits for the price of 10.  I wouldn’t be there long enough to take advantage, so I handed over some colorful bills.  He slipped them into a drawer and directed me to the women’s locker room.

I struggled to find an empty unit amidst the maze of white cubbies, stacked three high and hand-numbered in black marker.  Many of the doors were cracked or chipped, shelves tilted or missing.  I found an empty one at the bottom in a far corner, stuffed my belongings inside, and inserted my combination lock.  It wouldn’t have mattered; later I noticed that there was a gap between the door and the bottom of the locker, large enough for a hand.

I hurried down a chilly corridor, warmed by a few wall-mounted heaters, to the pool at the end.  Some swimmers were using pull buoys and kick boards.  I spotted a set of lopsided open lockers that were filled with them and walked over.

“What do you want?” huffed the pool monitor as I approached.  He, too, sat behind a table.  Was he more bureaucrat than lifeguard?  I pointed to the foam boards and buoys and told him I don’t speak Hebrew well.

“These are for the swim team,” he said, shutting the open doors.  He rustled around for a key and opened a different locker.  Blue and white striped pull buoys and boards tumbled onto the cracked floor.  He handed me one of each.  “Just be sure to return them.”  His clipped tone and direct gaze suggested that many people did not.

The kick board was faded red and flimsy, chunks of foam missing from the rounded edge.  A thin film of moisture and dirt coated the pool’s glass enclosure.  I dipped my feet into a lane, hoping that the swim itself would wash away my impressions of dinginess and neglect.  That the downtrodden facility was surrounded by gleaming shops and trendy restaurants made its condition more disappointing.  At the end of my swim, I brought the buoy and kick board to the lifeguard, being sure to smile.  He said nothing, but pointed to a chair.  I deposited them and left.  I wasn’t eager to return, but I had promised myself a daily swim.

The next day, a group of Anglos were chatting in the locker room about the fate of the pool.  One explained that the land underneath the pool was public, and had been designated for a recreation center in the 1950s, when the facility was built.  But, over the years, management had somehow moved to private hands, a transition that, like the pool windows, lacked transparency.  And now there was talk of building more structures on the property.

“It makes me so angry every time I think about it,” she said as she hooked her brassiere and wriggled into a sweater.  “The municipal government here is so corrupt.”  She shook her head as she slipped into green leather shoes.  “At least there are some swimmers who are involved in the legal aspects.  Hopefully we’ll keep the pool.”

Some days, but not all, an armed guard stood outside the entrance.  He didn’t recognize me from one visit to the next, prompting him to stop me each time.  Other times a fellow sat at a desk inside the main door; his role remained a bit of a mystery.  He solved Sudoku puzzles, but never asked to look at my bags, a practice at many supermarkets, malls and bus terminals in Israel.

The day before Passover a raven haired woman with a short, chic coiffure and sculpted eyebrows squeegeed the locker room floor, pushing water from each corner until it sloshed into a drain.  She plucked a floral bathing suit from a hook and dropped it on a bench.

“Why can’t people keep their things where they belong?” she kvetched.  I knew enough Hebrew to understand, but not enough to respond.  I shrugged and tried to look sympathetic.  An older woman came in and the two got into an argument.  Was it over the misplaced suit?  I didn’t know and didn’t want to find out.  I quickly dressed and wished them “Chag Sameach” (happy holiday) as I exited.  Two days later, I noticed someone had looped plastic ties through the latches of the few empty lockers, as if to say: Keep Out.

The pool monitor, at least, softened.  By my fourth visit, he remembered me and that I wanted to borrow a pull buoy (“puli” in Hebrew).  And during my final swim in a crowded lane, just hours before leaving for the airport, he came over and squatted by the pool edge.

“Can I give you some advice?” he asked as I touched the wall.  I wondered if he was going to correct my technique.

“Look, it’s empty now.”  He pointed to the neighboring lane.  With my focus on the clock and maneuvering around other swimmers, I hadn’t bothered to stop and look around.

“It will be easier for you,” he said.

“Thanks,” I said, ducking under the divider.  I relaxed into those last, unobstructed laps, unsure whether to be delighted that it had taken only one week for him to reveal his kindness, or deeply sad that it taken seven full days.  As I hoisted myself out of the water, I couldn’t help but think that the pool had been a bittersweet oasis, much like the country itself.