How to Feldenkrais Your Food 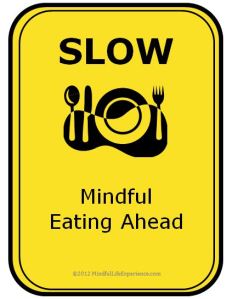 About an hour before cycling to a Feldenkrais class with Five Lines Boulder yesterday afternoon, I ate what was meant to be a light, late lunch. I prepared a small salad with hummus and chips on the side. The hummus container was about 2/3 full when I started. The more I ate, the more I kept eating. Eventually, there was so little remaining that, even though I was no longer hungry, I succumbed to an old compulsion and finished it, simply to not have to return a few spoonfuls to the refrigerator. In the middle of polishing it off, I had a vague awareness to stop eating but was unable to halt the momentum.

An overfull belly and abdominal discomfort, neither of which is ideal for riding a bike or taking a movement class. When I arrived to class, I joked with my teacher, Ethan Cowan, and another student that I had not “Feldenkraised my food.”  The student’s eyes widened. She repeated the phrase slowly, letting it sink in. She referred to what I had said as a “brain explosion,” which I took to mean that my words had opened at least one new neural connection. Perhaps my overeating had not been in vain.

“I’d like to be able to Feldenkrais my whole life,” I said.

Feldenkrais, while it uses movement as the field of awareness, is relevant beyond the blankets, mats and tables on which it is practiced. It’s an approach to living, all aspects of which involve movement of one kind or another. For me, the key things to remember when applying Feldenkrais outside of a formal lesson are:

When it comes to food, these instructions are not so different from guidelines in many contemplative traditions for mindful eating. To slow down while eating means to chew food thoroughly and to return utensils to the table when not using them, rather than hastily swallowing or shoveling forkful after forkful into one’s mouth. Finding the pleasant sensation translates into savoring each mouthful, perhaps noticing and identifying flavors and textures, so that food is appreciated instead of gobbled. Slowing down allows the brain to better receive the body’s signal that it is satisfied, so overeating is less likely to occur.

Part of the class that afternoon involved differentiating movements of the jaw. The teacher instructed us to move our lower jaw very slowly, in tiny amounts and in different directions, later adding in subtle movements of the head and eyes. At the conclusion of the lesson, I discovered that my jaw felt almost unrecognizably relaxed and spacious, as if a wire that had been clamping it shut had been removed. I hadn’t been aware that my jaw had been holding so much tension, which might have contributed to my compulsive eating in the first place.

After cycling back from class, I prepared a simple dish of spaghetti squash, onions, peppers and Halloumi cheese. I ate it more slowly than I did lunch with my newly liberated jaw. While distinguishing the crunchy squash from the salty cheese, it occurred to me that there is a third thing to remember when applying Feldenkrais:

A little goes a long way.

As I’ve experienced again and again in Feldenkrais lessons, small if not imperceptible movements can yield remarkable and surprising results. It’s not how much we do that counts, but the quality of attention we bring to even the most seemingly inconsequential acts that matters. That’s something for me to keep chewing on (slowly!) until it becomes second nature.

Interested in trying Feldenkrais at home? Please visit The Feldenkrais Project, a donor-supported site that offers dozens of high quality lessons. You can also Join my e-mail list or contribute.