Feldenkrais and Prufrock: On Reversing and Disturbing 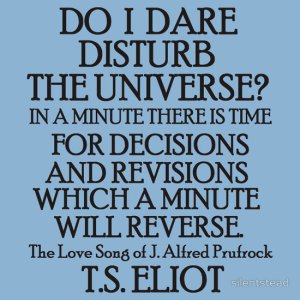 “Do I dare disturb the universe? In a minute there is time for decisions and revisions which a minute will reverse.” – T.S. Eliot, The Love Song of J. Alfred Prufrock

An important component of the Feldenkrais Method and martial arts is reversibility, being able to change positions or directions without reconfiguring oneself to do so. For example, when you are about to sit down, can you pause just before your derriere touches the chair, reverse the movement, and stand or turn? Or are you moving in such a way that you plunk or plop into the seat and have to reposition yourself to rise?

There is something elegant about reversible movement; in the case of Moshe Feldenkrais, who as a teenager walked from Europe to what was then called Palestine and, among other hardships, survived hand to hand combat as an early settler, being able to quickly reverse one’s movement can also save one’s life. Reversibility of thought is also a life skill: not continuous flip-flopping, but recognizing when one needs to change course rather than living out a decision that no longer serves.

When I learned about the KonMari process of decluttering, I was in the midst of moving out of my Boulder apartment. Before shredding letters from a former love interest, I read one in which he had copied a poem by Yevgeny Yevtushenko, Zima Junction, a verse he had sent me not once, but twice, decades ago. When I reached one of the last lines, which reads, “Now Go,” a raw sob arose from my depths, perhaps the den of my dormant animal self. I couldn’t ignore it. It was as if the poem had surfaced in order to communicate, in no uncertain terms, to leave Colorado, a hunch that had bubbled like a subterranean geyser which I had been too afraid to acknowledge. Of course, my gut failed to offer more precise instructions: leave temporarily or permanently? And go…where? To the Bay Area, to be co-located with my Feldenkrais training? Somewhere else?

Suddenly I was caught in a self-created complex multi-lemma, an existentially challenging and nerve wracking situation. Faced with putting my belongings in storage, again, or making a new choice, I picked the latter. Thinking of Feldenkrais and reversibility, I considered how I could remain agile and flexible and travel lightly in the face of uncertainty, while taking things one step, if not one breath, at a time. It became clear that my belongings would, beyond a certain volume, exert too strong of a gravitational pull, causing me to plop or plunk myself rather than pivot (ideally with grace). Since I couldn’t fathom getting rid of everything, save for one suitcase, I wondered where to put things I wanted to keep. Through a Google search, I found ship2storage.com, where one could ship boxes temporarily and have them sent elsewhere later, eliminating the need for movers or a personal storage unit.

Marie Kondo, the creator of the KonMari method, suggests a period of six months for working through her scheme. I suspect this timeframe is realistic for people with houses and families, whereas for one person in an apartment, less time might be required, especially if one is motivated and is already mid-purge . Still, I needed more than the 10 or so days I had between reading her book and moving by June 30. Beginning the process was like starting an avalanche and, despite my Feldenkrais awareness, I couldn’t halt or reverse it, nor did I think that would be desirable. I wanted to complete the process rather than leave a chunk unfinished that would drag on my psyche. As my living space filled with ever changing piles of things, and I kept uncovering more, I e-mailed two male friends to see if I might stay with them for a few nights in early July, to wrap up loose ends.

“Make yourself at home,” they said, even though one of them, who owns the house, would be out of town.

I drove several carloads of stuff downhill to their house where, to my chagrin, what remained even after my decluttering (and selling furniture) occupied a good chunk of their garage and living room. Surveying the boxes and piles, I wondered what I had gotten myself into. It took me another four days to whittle my belongings to what could be easily shipped or taken by car. Would it have been simpler and saner to put my belongings in storage, rather than practice extreme Feldenkrais around moving?

I started writing this post in late June and left it in draft form because I wanted to wrap it up neatly and upbeat-ly. But, I still don’t have an answer to that question, nor do I know where I’ll next call home. I wonder if my habit of moving is truly a choice or a compulsion echoing the trajectories of my late father and other ancestors, refugees and immigrants, who carried little and risked everything. For now, I’m staying with a friend in Massachusetts and helping her through a less extreme, and more gently paced, version of KonMari. It’s rewarding to lighten another’s load and to remind myself of the kindness of making changes slowly, forgoing the giddy exhilaration of speed. Though I have a roof over my head, ample food in my belly, and friends and family nearby, the geyser of anxiety keeps bubbling, the restlessness unabated. When I’m not immersed in nature or doing a Feldenkrais lesson on the floor, my body is not a comfortable place to inhabit. Perhaps the lightness I’ve extolled elsewhere is now, as Milan Kundera would say, unbearable. Yet, I am lucky. Like Prufrock, I can change my mind. I can practice a certain degree geographic reversibility. Meanwhile, those fleeing war, hunger or persecution, just like Moshe Feldenkrais did, cannot. These days, my thoughts are with the migrants and refugees from Syria especially, particularly those thwarted from transiting Hungary, from which my father escaped decades ago. Perhaps it’s impossible for me to feel at ease when the past is so palpably present, when multitudes are on the move, daring to disturb the universe.

3 thoughts on “Feldenkrais and Prufrock: On Reversing and Disturbing”