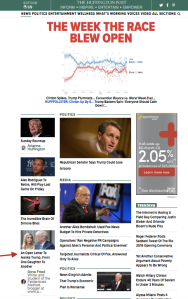 I added the red arrow.

As some of you know, my recent piece, An Open Letter to Ivanka Trump from One Daughter to Another, was published on The Huffington Post. It first appeared in the unindexed, unsearchable contributors’ section, sort of a virtual slush pile. Then an editor highlighted some quotes and posted it on the political blog, a place I never expected to see my words. That is not self-deprecating commentary. My style and typical subject matter aren’t an obvious fit with any political section. Indeed, a few longtime readers commented on Facebook, where the article circulated widely, that despite recognizing the sensibility of the writing and even my name, they weren’t 100% sure it was me or a doppelgänger! That people who are familiar with my voice didn’t connect the dots, either, made me chuckle.

How did my words arrive there?

In truth, I have had complicated feelings about publishing on larger platforms. The Huffington Post can help a writer reach a potentially enormous audience, assuming the article is featured (it can easily sink into the swamp of obscurity, too). Yet, the site doesn’t pay contributors. Furthermore, their categories can seem limiting to this a la carte spirit; I weave many things into my essays and cringe at either having to choose one box or write more narrowly. I once submitted an article through their normal channels, didn’t receive a response, and decided to approach niche sites instead. And, when I’ve seen articles of friends and acquaintances on HuffPo, I’ve envied their savviness and the courage to step out in front of a harsh world. I recoil at the mere thought of being scrutinized or torn apart by trolls in the comments sections. As Moshe Feldenkrais would say, I was caught in cross-motivational behavior. Both wanting and fearing the opportunities afforded by a larger audience, I remained stuck.

Last Tuesday, the overwhelmingly positive response to that letter, a letter I believed needed to be written and that I felt compelled to compose, made me wish more people could see it. While staying up until midnight watching the number of views rise as steadily as the mercury on a summer morning, I knew I’d deeply disappoint myself, and not for the first time, if I didn’t contact a large media outlet. Yet, most online newspapers want exclusive content and will not publish work that’s appeared elsewhere, even on an obscure blog. When I awoke Wednesday morning, I realized I needed to act decisively instead of succumbing to the quicksand of resistance. Buoyed by my readers’ reactions while intuiting that time was of the essence, I summoned the nerve to e-mail Arianna Huffington directly. I wrote that I had an urgent, timely piece for her consideration. Less than 30 minutes later, I received a warm response from her. Shortly thereafter I received an invitation to set up an account. It’s as if a writing godmother had waved her magic wand and, poof!, whisked me through a portal onto a larger stage.

After a wave of visitors to my blog receded, a tsunami of traffic arrived Saturday evening and continued through Sunday. I didn’t know why. A friend mentioned on Facebook that he’d seen my article on The HuffPo home page; that possibility had never entered my mind. While I hoped my words would strike a chord, I had no idea they would be placed so prominently and therefore be able to touch so many hearts so deeply. One person was even moved to make a generous donation. What I learned from this adventure is that, to quote a reader, there is room, even in the political section, for a “gentle” voice and compassionate language. As someone who is highly sensitive, I’ve often stayed out of the fray for fear of being steamrolled or shouted down, yet that choice has also left me feeling impotent, voiceless and out in the cold. What I am (quietly) celebrating now is not publication in HuffPo per se. Don’t get me wrong: it’s a pretty cool feather in my writing cap, one I will wear with delight as a reminder of what can happen when we follow our hearts and heed our intuition. More importantly, I’m now more hopeful that sensitive people can participate in the national dialogue, no matter the topic, and that one can be bold without being brash. Now that I have a HuffPo account, expect to see some of my blog posts republished there (if you have favorites, let me know!). Meanwhile, on the same day that my letter to Ivanka began to receive international attention, the niche site Hevria published another personal essay of mine. I dare say it’s also worth a read.

Writer, Feldenkrais champion, Aikidoka and explorer of internal and external landscapes.
View all posts by ilona fried »
« An Open Letter to Ivanka Trump from One Daughter to Another
Have I Been Hiding? No, Just Writing Elsewhere »