Whether you love, hate or are indifferent to Trader Joe’s, its model is distinct. According to TJ’s website, the business cuts costs by “putting innovative, hard-to-find, great-tasting foods in the Trader Joe’s name.” Although I purchase the bulk of my groceries elsewhere, I pop into their Boulder, CO store occasionally. I’ve discovered that their house brand hummous beats other prepared kinds and their organic arugula is a steal. At Passover, they sold kosher Matza for a stunningly low $1.99/box. In mid-April I came across jars of Fasolia Gigantes (beans) in tomato sauce, a traditional Greek recipe according to the label.  Always looking to add protein and variety to my pescetarian diet, I took one jar from a full shelf, thinking I’d get more if I liked it. 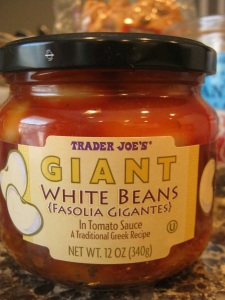 The beans, smooth and melty, with a bit of zing from the sauce, pleased my palate and comforted my soul.  Versatile, the beans added a delicious contrast cold in salads for lunch and heated alongside fish at dinner. If food were a lover, these beans were a candidate for a longer term relationship. I returned to Trader Joe’s a few days later, specifically to get more, only to discover that same section of shelf empty. Had there been a gigantic run on Fasolia Gigantes? I asked an employee if there were more.  She took the tag from the shelf and went to the computer to check.

Now there were none. My monkey mind started in: You should have stocked up!  As if the Fasolia Gigantes were a life saving elixir, and now I would perish. Still, I felt slightly disoriented, as if I had been stood up. I realized that, despite my awareness of Trader Joe’s policy (“If an item doesn’t pull its weight in our stores, it goes away to gangway for something else”), I had expected the beans would be there at least within the same week, unlike seasonal produce or holiday items.

Part of spiritual practice is to learn to be with what actually is, despite the mind’s insistence that life should be different.  Unavailable Fasolia Gigantes are, ahem, small potatoes even among First World problems. Yet, these big saucy legumes did reveal the processes of attachment and craving, and the resulting suffering, that runs in the operating system of my mind.  The Fasolia Gigantes, in their absence, reminded me of the importance of meditation, of not getting caught up in stories, even inconsequential ones about delectable beans. As I walked around the store, I tried to switch my focus to gratitude that I’d had a chance to try them at all, rather than the disappointment that the relationship had abruptly ended before the beans and I had even breakfasted together. Had there been a notice, as in other grocers, that an item would soon be discontinued, I would have had a chance to clutch the remaining jars tightly or say, “Farewell, Fasolia Gigantes! I will miss you.”

In the checkout line, I realized that maybe the best, if not only, thing Trader Joe’s continuously offers is an environment in which to practice embracing impermanence and non-attachment. Perhaps the next time I go I can think of the store as a Zen center where, instead of robes, folks wear Hawaiian shirts.